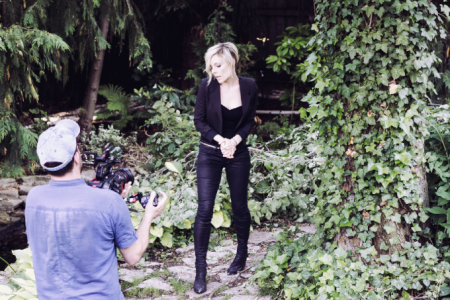 “Many can relate to being infatuated with meeting someone or achieving something,” muses award winning Canadian singer/songwriter Christina Martin in the wake of her latest video, “Impossible To Hold” — which you can watch below. “I always daydreamed over meeting the great makers of the music I loved: Stevie Nicks, David Bowie, Annie Lennox or Tom Petty. What I know about great art is it allows us to feel a closeness and connection that transcends the need to physically hold onto someone or something.”

Infatuation was the impetus for a powerful single that became the title track of her sixth studio release of the same name, out earlier this spring. “I had written 80% of “Impossible To Hold” with my head stuck in the clouds, and then took a break from the song,” she explains. “While touring in the UK, I attended a Carole King performance in Hyde Park in London. At the age of 75, she performed her most cherished songs with an undeniable passion and excellence. The experience reminded me of the power that music has to affect people so profoundly.”

Leaving the park that night meant leaving this song’s unfinished status behind. Within a week, the final sprint of lyrics were penned and polished. “This song evolved to be a kind of tribute to the iconic singer/songwriters that made me want to excel at performing.”

In a full-circle moment, the East Coast-raised Canadian found herself once again on tour in the UK, and once again in the audience at Hyde Park — this time for Stevie Nicks and Tom Petty and The Heartbreakers.

The performance proved poignant for many reasons. “Dale and I flew home and finished recording the album,” she says of the experience with her guitarist and producer, Dale Murray. “Soon after, the tragic news hit that Tom Petty had died. It felt like a mistake.  When I sing the song on stage now, I think of the impact his concert had on me and the people he reached with his music. It makes me want to make music that matters”