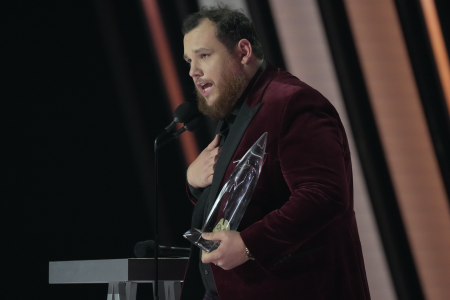 The Country Music Association’s 55th awards ceremony was a night to remember with show-stopping performances and surprise winners.

It was Luke Combs who took home the nights top prize, Entertainer of the Year award – a much deserved win after his rollercoaster ride to the top of the genre in recent years. Nonetheless he seemed overwhelmed as he accepted the award.

Chris Stapleton was the night’s biggest winner, taking home four wins for CMA Album, Single, Song and Male Vocalist of the Year, while also being recognized for his work as a producer on his album and single. In addition to Stapleton, producer Dave Cobb and mix engineer Vance Powell earned two awards for CMA Album and Single of the Year, while songwriter Mike Henderson earned a trophy for CMA Song of the Year. Brothers Osborne won CMA Vocal Duo of the Year, as T.J. Osborne graciously took to the stage to proclaim, “It really does feel like love wins tonight.” Nine months ago, TJ came out to the world and last night the cameras filmed him kissing his boyfriend as the brothers made their way to the stage. Many took to social media to applaud his actions, saying how, though it may have seemed a small gesture, it was a big turning point in a genre that has had it’s struggles with homophobia.

Jimmie Allen, who performed “Freedom Was a Highway,” received CMA New Artist of the Year, tearfully taking the stage to share that five years ago, he spent his last $100 to purchase a ticket to attend “The 50th Annual CMA Awards,” just to see his hero Charley Pride perform.  In one of the most emotional acceptance speeches of the night, Carly Pearce was brought to tears upon winning CMA Female Vocalist of the Year for the first time, as fellow nominee Ashley McBryde helped her to the stage. Old Dominion continues their reign as CMA Vocal Group of the Year, having now won four years in a row.

Mickey Guyton, Brittney Spencer and Madeline Edwards shared an empowering performance of Guyton’s new song “Love My Hair,” which received a standing ovation. The performance was introduced by 14-year-old activist Faith Fennidy, a young Black girl who, in 2018, left her 6th grade classroom in tears after school officials complained that her hairstyle violated school policy.

In true CMA Awards fashion, artists delivered once-in-a-lifetime collaborations throughout the night. Pearce and McBryde performed their heartachingly beautiful duet “Never Wanted to Be That Girl,” while Chris Young and Kane Brown brought the crowd to their feet with their chart-topping, smalltown ode “Famous Friends.”

Jason Aldean and Carrie Underwood delivered the world television premiere of their recent No. 1 hit “If I Didn’t Love You,” and Dierks Bentley welcomed BRELAND and HARDY on stage for “Beers On Me.”  Keith Urban took to the streets of downtown Nashville, performing his new single “Wild Hearts” while walking down Broadway into Bridgestone Arena.

It was a fantastic night that really showcased everything that country music is.