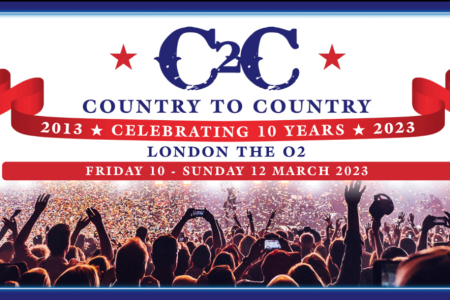 To celebrate 10 years of C2C, world-renowned superstars Zac Brown Band, Thomas Rhett and Lady A have been confirmed to headline the 2023 installment of the festival. They will be joined by Nashville’s hottest and most buzzed about artists Midland, Jordan Davis, Old Crow Medicine Show, Lainey Wilson and Mitchell Tenpenny alongside prolific performers Lindsay Ell and Matt Stell. CMA’s international series Introducing Nashville also returns which sees exciting, emerging newcomers share the mainstage for an acoustic set, recalling stories behind their tracks. Further special guests will be announced soon.

Throughout their career spanning more than a decade, Zac Brown Band has had six consecutive albums reach the top 10 of the Billboard 200 and five consecutive albums debut at #1 on Billboard’s Country Albums chart. To date, the group has won three GRAMMY Awards, sold more than 30 million singles, 9 million albums, amassed over 10 billion catalog streams and achieved 16 #1 radio singles. Since their debut, Zac Brown Band has developed a reputation as one of the most dynamic live performers, marked by strong musicianship that defies genre boundaries.

Ten years after signing his record deal with Big Machine Label Group’s The Valory Music Co., arena-packing superstar Thomas Rhett has 19 multi-platinum and Gold-certified No. 1 hits, 12 billion streams and the longest current active streak of consecutive No. 1s in the format (Mediabase/Country Aircheck Chart). He has been honoured with eight ACM Awards including Entertainer of the Year, two CMA Awards, five GRAMMY nominations, plus trophies from the CMT Music Awards, Billboard Awards and iHeartRadio Awards, in addition to being recognized with two CMA Triple Play awards for penning three No. 1 songs within a 12-month period.

Built around rich vocal harmony, vivid emotional writing and a smooth fusion of Country, rock and pop, Lady A have long been a model of mainstream success. The trios 11 No. 1s, 18 million albums sold, 34 million tracks, five billion digital streams and a global touring footprint prove that point. Known for their 9X Platinum hit “Need You Now,” which is the highest certified song by a Country group, they have earned CMA Awards Vocal Group of the Year trophies three years in a row and countless other honours including five GRAMMY Awards, Billboard Music Awards, People’s Choice Awards, Teen Choice Awards, and a Tony Award nomination.

Maverick’s Top Pick: What If I Never Get Over You

Current Billboard Award nominee Jordan Davis first broke through with his 2018 Gold-certified debut album, Home State and three consecutive No. 1s-including the Platinum-Certified hits “Slow Dance In A Parking Lot,” “Take It From Me,” and the Double Platinum-Certified “Singles You Up.” Most recently, Davis wrote and released his 8 song EP Buy Dirt, whose title track became one of the Top streamed country songs of all time and earned the singer/songwriter 4 ACM nominations, including Song of the Year, as well as a CMA nomination for Musical Event of the Year.

Hailing from Dripping Springs, Texas, lead vocalist Mark Wystrach fronts Midland’s rich sound that is rounded out with lead guitarist/vocalist Jess Carson and bass player/vocalist Cameron Duddy. Rooted in tradition in both sound and style, the trio initially garnered attention playing clubs in the region. Their critically acclaimed sophomore album LET IT ROLL (Big Machine Records) earned the No.1 position on Billboard’s Top Country Album Sales chart upon release. Their 2x Platinum-certified chart-topping debut “Drinkin’ Problem,” which offers an intentional nod to Country music reminiscent of the 1970s and 80s, earned the band their first GRAMMY Awards nominations for Best Country Song and Best Country Duo/Group Performance. The trio was also named New Vocal Group of the Year at the 2018 ACM Awards and are bringing listeners a resurgence of their thick harmonies, sad melodies, tart lyrics, and steel guitar with their latest album THE LAST RESORT: GREETINGS FROM (Big Machine Records).

Old Crow Medicine Show got their start busking on street corners in 1998, from New York state and up through Canada, winning audiences along the way with their boundless energy and spirit. They eventually found themselves in Boone, North Carolina where they caught the attention of folk icon Doc Watson while playing in front of a pharmacy. He invited the band to play at his festival, MerleFest, and the rest is history. It’s been over twenty years since these humble beginnings. The band has gone on to receive the honour of being inducted as members of the Grand Ole Opry, and have won two Grammy Awards: “Best Folk Album” for Remedy (2014) and “Best Long Form Music Video” for Big Easy Express (2013). Additionally, their classic single, “Wagon Wheel”, received the RIAA’s Double-Platinum certification in 2019 for selling over 2,000,000 copies.

Six-time CMA Award nominee and ACM New Female of the Year 2022 winner, Lainey Wilson has earned the enthusiasm of the industry, having been named to nearly every “Artist to Watch” list, being crowned Billboard’s “Top New Country Artist of 2021,” and earning CMT’s “Breakout Artist of the Year” for 2022, the Louisiana native is one of Nashville’s hottest and most buzzed-about new artists. Landing her first No. 1 with her Platinum Certified ACM Song of the Year “Things A Man Oughta Know,” nearly 10 years to the day after leaving her small farming community in a camper trailer to chase her dreams, she has won over legions of fans with her signature Bell Bottom Country sound and aesthetic, which blends traditional Country with a modern yet retro flare.

Since the release of his debut single, “Drunk Me,” Mitchell has set new standards for breakout success in country music. The 2X Platinum-certified, No. 1 hit that has amassed over 550 million on-demand streams was taken from his introductory 2018 album, Telling All My Secrets, and earned him the best first week showing for any major label country debut LP. Since that time, the “winning” singer (the New York Times) was nominated for New Male Artist of the Year at the ACM Awards and Breakthrough Video (“Drunk Me”) at the CMT Music Awards and saw his “Alcohol You Later” and “Anything She Says” singles certified gold. His latest album ‘This Is The Heavy’ is out now.

In only the last three years, Matt Stell has quickly made his mark on country music, amassing over half a Billion music streams across his catalog, including back-to-back No. 1s “Prayed For You” and “Everywhere But On” along with fan favourites “Boyfriend Season” and “That Ain’t Me No More.” He has since made his Opry debut and performed on “Good Morning America,” “The Kelly Clarkson Show,” “The Late Show with Stephen Colbert’s” #LateShowMeMusic digital series, “Bachelor In Paradise” and sung the national anthem for NASCAR and NFL events.

Maverick’s Top Pick: Prayed For You

With more than 200M global career streams, Lindsay Ell has become one of the most celebrated female voices in country music. Lauded as “one of the most exciting and talented young artists” (Forbes), Lindsay Ell has two Canadian #1 singles (“Criminal” / “Want me back”), a US #1 single alongside Brantley Gilbert (“What Happens In A Small Town”) and in 2021 celebrated her third consecutive CCMA Award win.

With Platinum breakout “My Truck,” singer/songwriter/producer BRELAND has emerged as a bold new force on today’s music landscape. The Breakthrough Artist by Amazon Music first popped off when the Hip-Hop and Country hybrid hit #1 on Spotify’s Global Viral 50 in 2019, and a remix featuring Sam Hunt landed on best-of-the-year lists from NPR to The New York Times. Adding to his 650 Million+ career streams, BRELAND’s debut album CROSS COUNTRY is out now and features infectious releases “Told You I Could Drink (feat. Lady A),” “Natural,” “Praise The Lord (feat. Thomas Rhett),” GOLD-certified “Throw It Back (feat. Keith Urban) and title track (feat. Mickey Guyton).