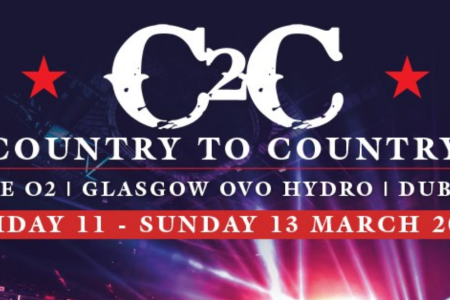 Many of the headliners and main stage acts have now been announced for Country 2 Country 2022. Although we’re still expecting more surprises and pop-up stage announcements, we thought we’d bring you more information about each artist and a recommended song to whet your appetite for what’s to come!

Earlier this year we interviewed Miranda Lambert alongside Jon Randall and Jack Ingram as together they released ‘The Marfa Tapes’. It was the most authentic country album I’ve heard in a long time, the songwriting was incredible. On the other hand she’s teaming up with Elle King to deliver a brilliantly, catchy country-pop tune. Her versatility as an artist and writer within this great genre is what keeps her relevant and exciting. With new music being teased all the time, Lambert is bound to deliver a night to remember at C2C with a mixture of fan favourites and new material!

Recommended song: If I Was a Cowboy

Originally of the band Hootie and the Blowfish, Darius has had a long and varied career, but it’s his success as a solo country artist that has led him to once again headline C2C. Since 2002 he has released seven studio albums and had nine number one singles including the 9x Platinum cover of ‘Wagon Wheel’. Whether he’s fronting a band or going solo, Rucker is a true entertainer and will really captivate the crowd with his set at C2C, just as he did last time.

Recommended song: It Won’t Be Like This for Long

Luke Combs has risen to the top of this genre as fast as a firework, his colourful music bursting over the heads of his peers. His first 11 singles all topped the country airplay charts with his latest two still on the rise when we went to print. He too has played at C2C before and his down to earth approach makes him relatable both in song and on-stage, building up a rapport with the crowd seamlessly. I was in Nashville at the Grand Ole Opry when they asked him to become a member, the emotion was clear on his face as tears filled his eyes. He is a man that loves the genre, it’s history and it’s roots, but he knows he’s the future of it too!

Recommended song: Forever After All

Kip Moore is a real entertainer when he gets up on stage and is a fan favourite amongst the UK crowd. Pre-covid he came over as much as he possibly could, often saying how he and his crew came over at a loss but they came anyway due to the fans. That’s the kind of dedication we like to see from an artist and as I say he puts on a high energy performance. You have to go back to his debut album to find his biggest hit, his only number one and our recommended song but nonetheless, his records are full of charisma. His set is bound to get you up out of your seats at C2C.

Young has had a busy year, he released his third studio album back in June followed by his christmas album in October. His brand of country-pop, West Coast-meets-Southern sound, dubbed the “Caliville” style coupled with his honest lyrics, has captured the hearts of fans all over the world. He is one of the genres radio stars having racked up 7 consecutive chart toppers on the Airplay charts. Young is bound to be one of the most talked about artists at the festival.

Ashley has wowed C2C audiences for two years in a row! In 2018 she played in the indigo as part of the BBC 2 pop-up stage and captivated the room, she eclipsed what happened on the main stage as all who was there, never stopped talking about her incredible set. The following year she made the leap to the main stage and impressed once again with a full band show. With the nod of approval from the likes of Garth Brooks and Barack Obama, McBryde is one of country music’s finest assets.

A graduate of Nashville’s prestige Belmont University, Dickerson broke onto the scene in around 2016, opening for the likes of David Nail and Thomas Rhett. His breakthrough single ‘Yours’ was a massive hit, topping the charts and being certified 3x Platinum. His next three singles would all go on to claim the top spot and certify Dickerson as a serious contender within country music.

Scotty has been trying to come over to the UK for a while now but something always crops up to scupper his plans so it will be great to finally be able to give him the warm British welcome he deserves! A former American Idol winner, McCreery has been impressing the country community for the last ten years now, releasing four albums, 3 of which topped the albums chart and having a string of chart topping singles including our recommended song ‘Five More Minutes’.

This was the name that raised the most questions when the line-up was announced with many being unfamiliar with the bands music. A Texas country outfit, Flatland Cavalry have released three albums now, they have an authentic sound to their music and you’ll be tapping your foot along to their music. They’ll certainly bring a little honky-tonk flavour to the O2.

Runaway June are graduates of the C2C pop-up and spotlight stages, impressing fans before with their vocal harmonies and captivating melodies. The group only have one full length album but have released a couple of EPs and toured with Carrie Underwood. The group had a slight change in line-up last year when Hannah Mulholland left the group and was replaced by Natalie Stovall.

Recommended song: Buy My Own Drinks

Hailey’s songwriting is phenomenal, she has written for the likes of Little Big Town and Alan Jackson as well as her own records (you can probably expect to see her at the CMA Songwriters the night before). She regularly collaborates with hitmaker Lori McKenna and her album ‘Living the Dream’ released earlier this year has garnered a lot of well deserved praise from her peers.