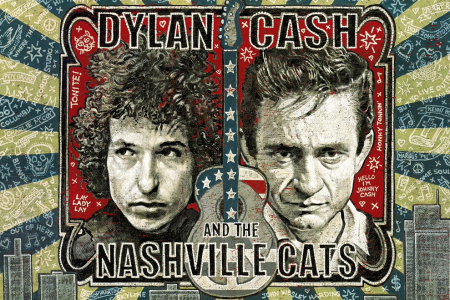 Much like the rest of the world, after the Pandemic of 2020, Nashville, TN continues to open its doors more and more to the public, but certainly not to the levels of 2019 yet. Some restaurants and businesses were forced to close in the last year but fortunately institutions like the Country Music Hall of Fame have figured out ways to survive and even thrive. Recently two major exhibits were launched online, providing free access to the world with what previously required a ticket for admission to view in person. “Suiting the Sound: The Rodeo Tailors Who Made Country Stars Shine Brighter” and “Dylan, Cash and the Nashville Cats: A New Music City” are the very first multimedia exhibits to be released on the Halls website.

The online exhibits were funded by a grant from the National Endowment for the Humanities (CARES) with the goal of expanding access to more people. It is another method to share incredible music history and to help spread the continued reputation of Nashville as Music City USA. The Suiting the Sound virtual exhibit pulls from the Halls exhibit galleries and permanent collection to show the true creativity and artistry of Western-wear designers. These craftsman and women were nicknamed “Rodeo Tailors” but they were the people that gave Country Music its flare and flash with beautiful stitching and rhinestones on matching costumes that made the artists standout on stage and under the performance lights.

Custom Cowboy clothing first began emerging in the 1940’s and 50’s originating from Eastern European designers. Visitors to the website will learn about some of the forefathers of these clothing statements such as Nudie Cohn, Nathan Turn and Rodeo Ben Lichtenstein. The Nudie Suits, as they are frequently called, are continued in tradition by current designers like Manuel Cuevas and Jaime Castaneda. Marty Stuart and many other Country Music stars continue to custom order and wear clothing created by Manuel in his Nashville shops. The online exhibit depicts the stage clothing, tools used to create the styles, historical photographs and videos.

The style and fashion of the Country Music artists wasn’t only limited to shirts, jackets, pants and dresses. It could also include boots, ties, scarves, vests and of course decked out hats. To play the Grand Ole Opry and other major Country Music venues it was a right of passage to have custom Country Music clothing created that the artists and bands would wear for the performances. This could even be seen on the TV show Hee Haw with Buck Owens and Buckaroos all decked out in matching suits and boots that drew attention to them and their performances. The clothing and its creators and tailors continue to play a role in Country Music today and “Suiting the Sound” provides an incredible overview of these styles.

“Dylan, Cash, and the Nashville Cats: A New Music City” was first shown as an exhibit at the Country Music Hall of Fame back in 2015 through 2018 but has now been adapted for online viewing for those fans that couldn’t make the trip to Nashville to see it the first time or want to view it again. This exhibit reflects the impact that Bob Dylan has on Music City back in the 1960s and how Johnny Cash’s cutting-edge television program brought many non-country artists to a brand-new audience. Cash was ahead of his time by showcasing artists and bands from Rock, Pop, Country, Bluegrass and Folk on his program. Today a reflection of all genres of music is expected in Nashville but back in the 1960’s and 70’s the town was only thought of us a Country Music hub.

Bob Dylan also did his part to expand this image by coming to Music City and recording in the studios here with some of the best session musicians in the industry. He even gave a young and upcoming Charlie Daniels his first shot at studio work on his Nashville Skyline album. Daniels was a fill in guitarist since the other session guitarist that was booked to play Dylan’s sessions was sick. When the other player returned to the studio Charlie started to pack up his guitar to leave but Bob requested that Daniels stay and play on his album also. The rest is music history.

Items on display on the Halls virtual exhibit include a handwritten manuscript by Dylan for a song called “Wanted Man” that was later recorded by Johnny Cash. A 1949 Martin 00-17 acoustic guitar that Bob Dylan played in the 1960s. One of Lloyd Green’s Sho-Bud pedal steel guitars that was used on the Byrd’s song “Sweetheart of the Rodeo” and many other hits. A Fender Precision bass that belong to Norbert Putnam that can be heard on songs by Linda Ronstadt, Joan Baez, Kris Kristofferson, Tony Joe White and Elvis. The exhibit wouldn’t be complete without Johnny Cash’s Eaves Costume Company suit that he wore on his network TV series “The Johnny Cash Show.” This virtual exhibit at the Country Music Hall of Fame does an incredible job of reflecting the musical diversity that is modern day Nashville, but also how this trend began back in the 1960s thanks to artists like Johnny Cash and Bob Dylan.

To visit these exhibits for yourself, and to share them with others, simply visit the Hall’s website below. It is free to the public and you’re sure to find other amazing videos and photographs that are curated on this treasure of a website.

One of my personal favourite videos on the Country Music Hall of Fames website is “Big Night at the Museum.” This past May “Big Night” won three Telly Awards at the 42nd Annual Telly Awards event for best Online: Concert, Not-for-profit and for museums and galleries. Maverick Country magazine covered the release of this video last year. The video/documentary/fund raiser was designed as a platform to raise money for the Country Music Hall of Fame as a Coronavirus Relief Fund. The biggest names in country music were involved in the production from Marty Stuart, Kane Brown, Keb Mo, Grad Paisley, Reba and Ashley McBryde. And the audio was curated by award winning producer Dave Cobb. “Big Night” had over 4 million viewers and raised more than 1.1 million dollars to support the museum. You can watch this presentation and many others on the Halls website. Watch for new video releases and exhibits later this year also! You can also plan your next visit to the Hall and book your tickets in advance, but until you can come in person the virtual exhibits are the next best thing!