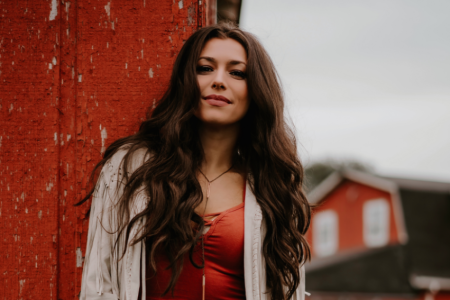 Jessica Lynn has always done things differently and in her own way, but after many years of plugging away, she is now in a position to release her debut album and make a huge statement in the process.

They say that you make your own luck in life. If you keep chipping away, doing the right things and try to be a good person along the way, things will fall into place for you eventually. It may not be the next day or the next week, but it will happen in time. That has very much been the case for Jessica Lynn, who after finally getting into a position where she could put out a six-song EP, instead got to work for a debut album.
The nature of lockdown saw the New York based artist hunker down and as such, she wrote some of the best songs in her career to date and is now merging them with songs from her past that were never given the studio treatment to create a 13-song album. There is also a notable guest contribution, but the whole process highlights how Lynn takes an opportunity and grabs it with both hands.
“This album was never supposed to happen,” Lynn says. “It was going to be a six song EP that went out right before we went on the tour, so we had some new stuff to push. I’m the type of person that just finds the silver lining in everything – I don’t know if it’s the hard-headed New York Italian in me, but I was like ‘alright, let’s do something great with this and fight back’. So, we chose to do a full-length album, it’s now up to 13 songs and one of which actually features one of my favourite UK musicians in Steve Marks from Gasoline & Matches.
“I wanted to put songs on there that I felt never had a proper chance. For example, there’s a song on there from my first nationwide TV special in America that only had a live album to go with it. It was never a single, it was never even recorded properly and it was my favourite track on the whole thing, so we added that and some songs that I’d only performed live prior to this. I then also started writing again for the record and that’s why it ended up getting so long, because I was locked in here and just writing stuff that had to go on it!”

Not bound by genre

In addition to tracks that never got a proper chance, you will notice with Lynn’s album that she fuses and blends a number of different genres together. While she does, of course, stick largely to country and her style of rock, she doesn’t pigeon herself into boxes and stick to them – if she comes up with a song that is a bit left field but really feels it, she’ll run with it. That is something that she is hoping to push with ‘Lone Rider’, as she feels the record shows her genuine self across a few genres.
“I think that this record is going to show people really who I am. When I set up to write it and put it together, the intention was never to stick to genre. I’ve loved so many types of music and growing up in New York I didn’t have the traditional country music influences that a lot of other artists have, but I just wrote from my heart and very honestly and purely.
“It could be a kind of weird ballad but you know what? If I love it and it’s me, it’s going on. I don’t have to care about anything else and that took my writing and me as an artist to a totally new way and I think people are going to like that.”

Building up to this moment

In the early part of January, Lynn celebrated her 31st birthday and considering she has been involved with music ever since she was 13-year-old, the question was asked as to why it is only now that she is releasing a studio album. The answer to that is primarily down to the financial difficulties of being an independent artist, but Lynn also wanted to wait until she could unleash everything into a project and then go with that. Now, she has her chance as everything has fallen into place for her.
“I’ve always been an independent artist and it’s very difficult. I have dedicated my life to getting out there, shaking hands, doing social media to try and get people to understand my music, because you never have money as an independent artist. You always have to be creative and think about the most bang for your little buck that you have or how you’re going to do it.
“Putting out an album is a big undertaking and to get people to purchase an album is a bigger undertaking with streaming and Spotify, so I always try and do things the smart way, because we’ve always had very limited resources. For me, just putting out singles or live albums was always just the way to go. I never wanted to put so much of my heart and soul into something and then not be able to do something with it.
“I’ve fought hard during the pandemic and before lockdown, I was reaching 500,000 people on Facebook. I hit 15 million last month. It blows my mind, but it’s so cool to see all your hard work and your effort actually pay off in a very tangible way. It’s been making me feel very confident, so you know what? This is the perfect time to take a new step as my career has reached new heights.”

Things could’ve been very different for Lynn from a musical perspective but for things out of her control, as the childhood band that she fronted and wrote all the music for was gaining international recognition, even when they were early teenagers. As crushing as the rejection was at the time, Lynn believes it was for the best in hindsight as not only did she feel she wasn’t ready for what would have come next, but it wouldn’t have led her to her true calling or given her some valuable life lessons.
“I had one of the biggest heartbreaks in my life, which turned out to be the biggest blessing in that kid band. We really had something special. We were top five in an international battle of the bands when I was 13 against all adult bands, we were looked at by major record labels and we even nearly got a major record deal when I was 16 with that band. I was writing all the music, I was the puppeteer behind the strings because even though I was a kid myself, I never had that kid mentality. I still have the same mind that I have now that I had back then – this is what I’m gonna do, this is my career.
“Sadly, two of them made some not smart decisions with their personal lives and that ripped the record deal away from me. It was heartbreak like I cannot even tell you. Especially as a kid, you can’t understand why something like that happens to you or the knowledge to look in hindsight and go ‘it’ll be a blessing’. It was such a tragedy and that was that. It was at that point that I said ‘I’m gonna do country music’ and then my whole life changed.
“I look back at how cruel this business can be and how people use you and say mean things to you online and I look back and think about that 16-year-old kid and say to myself ‘you’d have been eaten alive’. Thank God that didn’t happen. What a blessing – all these amazing people I’ve met since then, all the amazing music I’ve been able to do…it never would’ve been the same. Every bad experience adds value to your life and it’s up to you what you do what it and make the most of it.”

Taking her own road
Unsurprisingly given her talent and ability, that wasn’t the only time that Lynn was offered a major record deal – however, the second time gave her a real insight as to how brutal the music industry can be. The cost of the record deal would’ve been many things, but mainly her identity and personality, which was something that Lynn simply would not hand over. Much like the band heartbreak, she is able to look back on this and comfortably say that she made the correct decision.

“I’ve loved so many types of music and growing up in New York I didn’t have the traditional country music influences that a lot of other artists have, but I just wrote from my heart and very honestly and purely”

“I actually had a meeting in Nashville with a guy who manages many of today’s major superstars. He said he was willing to sign you – and pretty much make me a star, in other words – but he played a bunch of music for me and said ‘I want your music to sound like this. What you’re doing is good, but it’s not hip – and I want you to get rid of your band, they’re too old.’ My band is my family. They’ve been with me a long time and that’s part of the magic of what we do. It’s a special dynamic that people really connect to and it’s unique. The relationship I have with my guys…they’re not hired guns. They’re just as much family as my real family.
“I remember saying ‘well I need to think about this’, as I was just so overwhelmed. My husband was outside and I went into the car, I sat for a second and I called the guy and said ‘thank you, but no thank you’. And I remember thinking I’d made the biggest mistake of my life, but then, fast forward, it was the greatest blessing I ever could’ve had. Maybe I could’ve done that and had a number one hit or something, but it wouldn’t have been genuine, it wouldn’t have been me and I would’ve been a carbon copy of all those girls he showed me at his office. Where are they now? Nowhere, because they’re all the same.
“I took my own path and because I was different, opportunities started to come. I don’t think I would have ever been touring Germany and France and all these places like I am now, because my music is very rock and roll crossover and that really goes well over there. I’ve spent over a year in Europe at this point touring, I never would’ve been doing that if I’d sounded like everyone else.”
You make your own luck in this world and while it may have taken a little longer than she perhaps planned, 2021 will be the year that Jessica Lynn puts out a solo album on her accord, by her own rules and with songs that she wanted on there. She is perfect proof that if you stick to your guns and what you believe in, you can be a success and we have no doubts that the album will be a hit.


To stay up to date on the latest, trends, innovations, people news and company updates within the country music market please register to receive our newsletter here.