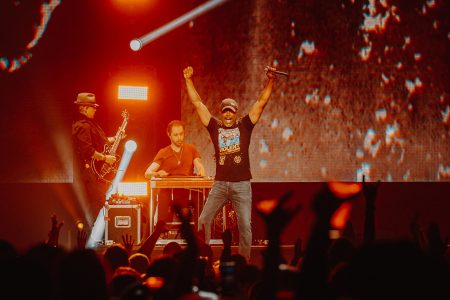 It was Darius Rucker’s turn tonight to blow the roof off the O2 and he certainly did that! Day 2 was packed full of fabulous artists both in the main arena and on the outer stages which showcased the broad spectrum of country music. There was something for every type of country fan!

My day began with a beautiful Bluebird session in the O2 Blueroom featuring Luke Dick, Laci Kaye Booth, Jeff Cohen and Tony Arata. I was excited, the caliber of these writers was second to none, and it was about to be a morning full of tears and laughter. Luke Dick kicked things off with ‘Polyester’, the song he opened with on Thursday at the CMA Songwriters Series, bringing a little bit of humour from the first note of the show. He’d go on to play ‘Burning Man’ and ‘Bluebird’, talking about the different kinds of birds he’d seen since he arrived in the UK in his introduction.

Laci Kaye Booth impressed with her soft, whispy vocals as she sang songs such as ‘True Love’, a tune that has seemingly got stuck in my head over the past few days! Next to her was Jeff Cohen, the man behind such songs as ‘Postcard From Paris’ by The Band Perry and ‘Take Me As I Am’ by Sugarland but today he played a song that has just been play-listed by the BBC, ‘I See Stars’ which The Shires co-wrote with him and recorded, followed by ‘In Her Eyes’ in the second round, a song which Josh Groban made famous and he told the endearing story of how this track impacted a family in Australia. In his final round he played a mash up of Paw Patrol and Crazy For This Girl, the latter of which was the first song of his that went to radio.

Tony Arata was situated last in the round and his credentials alone blew me away, he’s written for the likes of Trisha Yearwood and Emmylou Harris. His voice was rich as he sang ‘Here I Am’, a song Patty Loveless took to number 4 on the charts back in the mid 90’s. he concluded the whole show with the song that changed his life and explained the story behind how Garth Brooks came to record it – ‘The Dance’. It was breathtaking to hear Tony sing such a well crafted song that has truly stood the test of time.

A few weeks ago, Maverick joined forces with Sony for a competition to see Tenille Townes and Friends in an intimate fan showcase. It was a joy to host that today. Tenille Townes, Caitlyn Smith and Alex Hall all took to the stage for a songwriters round before we opened it up for the floor to ask questions. Our Canadian Queen, Tenille played some new music off her upcoming EP ‘Masquerades’ before concluding with the song that propelled her into the limelight – ‘Somebody’s Daughter’. Meanwhile, Caitlyn Smith has impressed me all weekend with that breathtaking voice whilst Alex Hall was a fairly new name to me this year but has equally captured my heart just like the two girls when I first heard them a few years ago. Their rapport on stage was entertaining in itself, like being invited into the living room of three friends. Alex and Tenille’s duet was a particular stand out performance of the whole weekend!

In the main arena later Tenille performed with her full band, it was incredible to see the difference and the value in both a small acoustic songwriters session to a full band arena set. She owned the stage, those unique vocals shining with every note, her smile lighting up the room. She kicked things off with a high tempo set which included one of her latest releases ‘Girl Who Didn’t Care’ and ‘White Horse’ but knew when to strip things back with the more intimate ‘I Kept The Roses’ and the tear-jerker ‘Jersey on the Wall (I’m Just Asking)’ which sounds intense when the full band joins in after the chorus. Tenille belonged on that stage, it set the tone (and the bar) for the rest of the night!

So far this year, I feel there has been more music and less talking between songs (except for in writers rounds!) and the sets seem to have a higher energy to them. This was certainly a thought that crossed my mind during Scotty McCreery’s set as he played songs such as ‘Whereever You Are’ and ‘Damn Strait’. He talked briefly of the story behind the latter, touching on what a huge inspiration George Strait was to him. He played a few cover songs as well, pulling off a fantastic version of ‘She’s Not The Cheating Kind’. He showed his softer side with songs like ‘This Is It’ a song written for his wife and ‘Five More Minutes’, a song written about his Grandfather. This song was a particular highlight of the festival, his words and delivery causing tears to stream down my face whilst the rest of the arena shone their lights in the air.

Brett Young followed and the audience seemed to swoon over him – he did have a good rapport with them from the off. Again, he focused on the fun, upbeat numbers of his back catalogue for the most part. Most were up dancing by the second song in, ‘1, 2, 3, Mississippi’. ‘Ticket To LA’ had everyone singing along whilst Brett invited everyone to slow dance with whoever was sat next to them during ‘In Case You Didn’t Know’ and as I looked around, couples were taking the opportunity to enjoy a romantic dance. He took the tempo down a notch further with sad song ‘Mercy’ which received the biggest reception of the weekend upon it’s conclusion. He concluded with ‘Sleep Without You’ but the audience was begging him to stay. Though he focused on keeping the energy levels high, he had a nice mix of slower, more heartfelt tracks in there too.

As always in between the main stage artists, the spotlight stage lit up with new talent coming through the genre starting with Callie Twisselman who’s got a lovely voice and has really shown promise in recent years. Then came Matt Stell who has had two number one’s in the last few years and played them both on that stage. He was followed by the one and only Callista Clark who’s been exciting fans all weekend with that powerful voice.

Our headliner for the night though, was Darius Rucker who came on stage ready to party with a beer in hand. Of course the whole crowd was on their feet, singing along as he went through hits like ‘Southern State of Mind’ and ‘Beers and Sunshine’. He was another that just wanted to keep the party going and play as many songs as possible. The sound was a little shaky at times but I think that was just the excitement of being back in London and headlining C2C with a sold out, rowdy crowd! ‘Come Back Song’ took it up another level whilst he tugged on the heart strings of the crowd during ‘If I Told You’. They went mad as Darius welcomed Brett and Scotty back to the stage to sing ‘Family Tradition’. Darius introduced his band and in particular, his very talented slide guitar player who took over a solo before the band launched into ‘Only Wanna Be With You’. The crowd erupted when he said goodbye so it didn’t take long for him to return for an encore, in which he performed ‘Valerie’ and concluded with ‘Wagonwheel’ accompanied by a choir of about 20,000 people!

It was such a fantastic day, it makes me sad that tomorrow is our last day and we’ll have to wait again for another year! But we’ll soak up every last note and don’t forget to come and say hi in the Town Square.