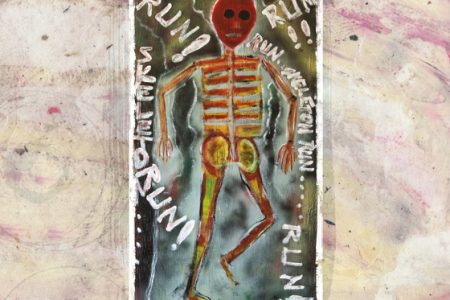 Singer-songwriter David Childers is the proverbial study in contradictions. A resident of Mount Holly, North Carolina, he’s a former high-school football player with the aw-shucks demeanor of a good ol’ Southern boy. But he’s also a well-read poet and painter who cites Chaucer and Kerouac as influences, fell in love with folk as a teen, listens to jazz and opera, and fed his family by practicing law before turning in his license to concentrate on his creative passions.
The legal profession’s loss is certainly the music world’s gain. Childers’ new album, Run Skeleton Run, releasing May 5, 2017 on Ramseur Records, is filled with the kinds of songs that have made him a favorite of fans and fellow artists including neighbors the Avett Brothers. Scott Avett contributes to four tracks, and Avetts bassist Bob Crawford co-executive-produced the effort with label head Dolph Ramseur. (Crawford and Childers, both history buffs, have recorded and performed together in the Overmountain Men).
In fact, it was Crawford who kickstarted this album, Childers’ sixth solo effort, by suggesting he reunite with Don Dixon (R.E.M., the Smithereens), who’d produced Crawford’s favorite Childers album, (done with his band the Modern Don Juans). Crawford also suggested tracking at Mitch Easter’s Fidelitorium Recordings.
“I’ve made records in my living room and been perfectly happy with it. But I think ol’ Bob wanted to give it one more shot,” Childers says. “It’s kind of like the Wild Bunch at the end of the movie, on their last train robbery.”
Not that he’s suggesting this is his “last train robbery.” Not with songs as rich as these. Sounding like literature and playing like little movies — several are under three minutes long — they’re populated by sailors, hermits, lovers and killers, facing off against fate, skeletons, good, evil, or simply the trials of everyday existence. Lust, virtue, guilt, innocence; alienation, desperation, sorrow, gratitude … he examines these conditions with such precision — combined with music that draws on folk, rock, rockabilly, country and Cajun influences — he doesn’t need lengthy exposition.
“You look at a song like ‘Pancho and Lefty’; it tells a story in four stanzas,” Childers notes. “An amazing story. That’s the way I approach songwriting. You don’t have to say so damned much. ‘The train went down, oh lord oh lord.’
That line is from “Belmont Ford,” a mandolin-laden disaster song about the Great Flood of 1916. It’s based on a poem by Mary Struble Deery, a Chicago friend. The twang- and bluegrass-infused “Collar and Bell” (featuring drums/percussion by his son, Robert, and fiddle by Geoffrey White) had a similar origin; its lyrics are derived from ones written by Shannon Mayes, an Ohio school principal. Another Ohioan, Mark Freeman, shares credit for “Hermit,” a mid-tempo rocker of sorts with Dixon singing harmony, that Freeman started and Childers finished.
“I’m always looking for ideas,” he says. “I’ve never been able to get any serious writers to co-write with me. Here are these folks, just regular people, and they got something to say, and they’re sending me stuff, and I’m going ‘Well, if they’re gonna send it to me, I’m gonna try and do something with it.’”
Childers has always regarded his place in the musical pantheon as that of an outsider, though not deservedly so. As those involved with this album indicate, he’s well-regarded among tastemakers. Evidence includes playing the syndicated World Café and Mountain Stage radio shows (he’s done the latter twice), as well as Merlefest’s mainstage. He’s also toured in Europe, and hopes to again. But he credits the support of Crawford and Ramseur with helping him sustain his musical career — which began in college, though he didn’t start recording until the ’90s.
Childers’ father had given him a banjo when he was 14, but he still had his “jock mentality” back then and didn’t do much with it. That changed when he picked up a guitar at 18.
“My girlfriend had left me for one of my best friends and I was all shook up and needed an outlet besides drinking and fighting. As soon as I learned my first chords on a guitar, I knew I had a friend who would never betray me,” he recalls. He formed his first band, the acoustic trio Steeltree, in 1973, and released his first album, Godzilla! He Done Broke Out!, as David Childers & the Mount Holly Hellcats, in 1995. His first solo album, Time Machine, came in 1998. He spent several years playing rock, folk and honky-tonk with the David Childers Band, then the Modern Don Juans, whose fans included the Avett boys. He calls his current band the Serpents, but says he’s given up trying to label each incarnation.
His last album, 2014’s Serpents of Reformation, delved into religion; this time, several songs address aging and the perspective of a man in review mode — a perspective he sums up on the final track, “Goodbye to Growing Old,” written with Theresa Halfacre. It approaches the subject with a mix of acceptance and defiance.
“I used to be afraid of growing old, but now I wouldn’t trade where I am for all the lean fury of my youth,” Childers insists, saying he’s happier now than he’s ever been. Especially now that he can concentrate on making music and painting; he and Robert did the album cover, a fine example of his primitive/outsider style.