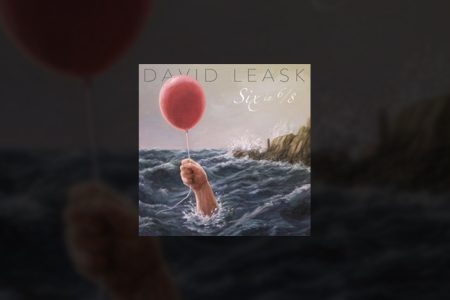 David Leask
Six in 6/8
Self-released
✭✭✭✭
Six of the best from the award winning wordsmith
Originally from Scotland, David Leask is now regarded as one of Canada’s leading song writers and numerous awards have made the music world sit up and take notice. His work draws from roots rock, Celtic and country although this rather short offering focuses very much on story-telling, anthem-like ballads, all played in his favourite 6/8 time signature. No less than 19 musicians add their talents to the album which was recorded in various studios from Toronto to Montreal, Nashville to Alabama. Justin Abedin’s excellent electric guitar is prominent on four of the six tracks but Leask appears to have selected specific musicians to suit particular numbers. This is certainly apparent on Red Balloonwhere Loretto Reid (flute, whistle, concertina), Rob Ikes (Dobro) and Doug Romanow (accordion) elevate this to the stand out track on the album. A charming tale of a child letting a balloon slip out of her hands and then remembering her mother’s words, when her first love deserts her; ‘let it go, let it fly’. All the songs are however, superbly crafted and David Leask possesses fine vocal talents although at times he attempts to sing slightly out of his range. When You Think No One Loves You, with its simple piano arrangement, is another superbly written ballad. This one’s certainly worth checking out; such a pity though that only six tracks, spanning just 23 minutes are featured.
John Roffey
www.davidleask.com