“Deborah Bonham and her band are from and for the heart, soul and feet…" 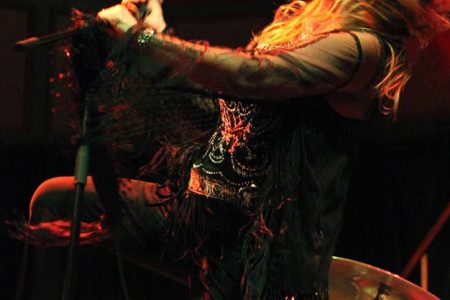 “Deborah Bonham and her band are from and for the heart, soul and feet. No one does what they do.  We need them.”
Those were the words used by the BBC to describe the group who have a vast portfolio of performances behind them. Worldwide festival favourite Deborah and her powerful band featuring players who have performed with Paul Rodgers, Black Sabbath, Steve Marriott & Rory Gallagher began yet another year on a high with her sold-out show during London Blues Week at the legendary 100 Club in January.
2017 sees a select series of UK dates and her return to Europe for further sold-out shows, where the French press call her “Princess of Rock”. Deborah and the band return to the UK for Giants of Rock in 2018 as the only band to have been invited to perform there four times.
In announcing the ‘Free Spirit’ UK tour, earlier this year, it was clear that Paul Rodgers felt that the tour would be something very special:

“It was so inspirational playing Free material with Deborah Bonham’s band, led by guitarist Pete Bullick, when we played charity gigs that I promised myself that someday we would tour the UK with this band”.

Backing the legendary Free, Bad Company and The Firm vocalist as he revisited his phenomenal catalogue with one of music’s’ seminal blues-rock bands was a timely reminder of the skills and power of the gifted and supremely talented Deborah Bonham Band. Deborah opened the shows with Nigel Kennedy and former Robert Plant guitarist, Doug Boyle.

“She’s quite possibly the most vocally impressive, entertaining and awe-inspiring performer I’ve seen. The band’s visual presence is phenomenal, all of who are visibly taking enjoyment from their time on stage.”  (MetalTalk)

Deborah’s performances over the last few years have included a mesmerising performance at The Royal Albert Hall, where she received a standing ovation at the sell-out concert, opening for Paul Rodgers. When Blues Matters! caught her duet with Dan McCafferty of Nazareth, it was “a vocal marriage made in Heaven”.
More recently, Robert Plant stepped on stage unannounced to a delirious crowd at Deborah Bonham’s show to perform Led Zeppelin’s ‘When The Levee Breaks’ with her band and added the Johnny Kidd & The Pirates’ classic, ‘Shakin’ All Over’ with Deborah, delighting the crowd with their obvious shared, magical chemistry. Deborah’s opening set for Foreigner at their most recent, sold out London Palladium show drew a rapturous response and Deborah was invited back on stage for the encore to duet on ‘I Want To Know What Love Is’.
With all of her albums now being released in through Cadiz Music, ‘The Old Hyde’ feat. Jason Bonham & Mick Fleetwood, ‘Duchess’ feat. Paul Rodgers & Jerry Shirley (Humble Pie), ‘Spirit’, feat. Robert Plant, Deborah is performing many of these songs live, plus several originally recorded in 1985 for her debut album ‘For You And The Moon’. ‘Looking Back At The Moon’ is a collection of the 1985-1991 sessions released for the first time on cd including the best of ‘For You And The Moon’ and some unreleased tracks. Now also available is ‘The Complete Sessions- Remastered’ the definitive version of her album last studio album, ‘Spirit’, which now gathers together all of the songs recorded at the ‘Spirit’ sessions, drawing together songs from the Limited Edition pre-release album, official album and a further, unreleased track.