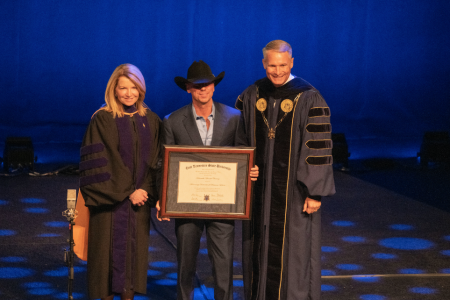 Kenny Chesney returned to East Tennessee State University to help honor the founder of his alma mater’s Bluegrass, Old-Time and Roots Music Studies Program, Jack Tottle. The internationally acclaimed program, which has graduated GRAMMY-, International Bluegrass Music Association-, Country Music Association- and Academy of Country Music Awards winners, is celebrating its 40th Anniversary as part of Homecoming Weekend. “Jack Tottle taught me how to dream, or inspired me to have the ability to dream enough to believe I could do this,” Chesney said of the renowned program creator, considered a global expert on bluegrass and roots music, as well as an accomplished musician. “He showed me that music could make connections beyond what we see, that it could communicate beyond language or location. He took us – the ETSU Bluegrass Band – to Russia as part of a cultural exchange and made that idea real.” A surprise guest at the celebration, Chesney was welcomed to the stage by President Brian Noland midway through the evening to shrieks from the audience. Noland and Provost Kimberly McCorkle awarded the four-time CMA and four-time consecutive ACM Entertainer of the Year an honorary doctorate of letters. After the current ETSU Bluegrass Pride Band performed “Me & You,” President Noland explained to the audience, “He is a paradigm-shifting artist who helped define country music in the 21st Century, selling out stadiums across the world… He is an inspiration, reminding the world — through his art and the example he sets — to live life with joy, humor, passion, and soul.  “Here at ETSU, we have issued a challenge to our faculty, staff and students to ‘go beyond.’ Mr. Chesney, soon to be Dr. Chesney, you exemplify that ideal. You have gone beyond genres, unifying people through your art and your work. You have gone beyond borders, sharing your amazing talent all over the world. And you have gone beyond yourself, using your voice to uplift others and give back to communities.” Taking the stage, the clearly moved songwriter/superstar delivered remarks that spoke of how much the program, region and especially the experiences in the choir, Bluegrass band and playing the local bars shaped his sense of what mattered in terms of music and songs. He drew laughter, saying he was going to make his road family refer to him as “Dr. Chesney” and surprised many by reciting the Quadratic Formula to show he was paying attention in class. “To say I wouldn’t dream this is an understatement,” Chesney explains. “I was spending most of my time at Chucky’s Trading Post, the Downhome, Quarterback’s BBQ and in the rooms at the music building, practicing my guitar. All I wanted was to get a song on the radio, write some things I could be proud of and get out on the road and have some fun. “My tour manager and a couple of my friends from back here are still out there with me, but I don’t think any of us would’ve seen this coming. But that’s why no matter what you dream, you have to just keep dreaming and believing.” Chesney’s degree was awarded earlier in the evening so he could be part of the presentation to Jack Tottle, who had started the program. A well-known historian, player and journalist, Tottle devoted the ‘80s and ‘90s to creating a program that would inspire young musicians – including Amythyst Kiah, Tim Stafford, Adam Steffey, Ron Block, Becky Buller and the program’s current director Dan Boner – to use music as a way to bring people together, to respect the roots, but also create music’s future. “When I was just beginning to really get serious, Jack Tottle was 10 years into this incredible program that focused on the region’s musical roots,” the only country artist in Billboard’s Top 10 Touring Acts of the Last 25 Years for the last 13 years explained of the program and Tottle’s impact. “He welcomed me, taught me a lot about songs, being in bands and what this music is made of. He took a bunch of us kids – several went on to play with Alison Krauss and Union Station – to Russia as part of a cultural exchange, teaching us how music builds a bridge places you can’t imagine. “So, it was my honor to honor Jack this way. He showed an East Tennessee kid the power of what music can do; and for me, it sure did.” Calling the professor emeritus “the catalyst for our dreams,” Chesney joined President Boland in helping present Tottle’s own honorary doctorate degree. Having flown in from Hawaii, the program’s founder beamed at his former student – as an example of the power of what his program and his commitment to classic roots music had sown over the last several decades. After the presentation, President Noland told the assembled, “The stories and memories shared by Kenny Chesney represent the sort of impact a professor and mentor like Jack Tottle can have on a student. “The mission of this university is to improve the quality of life for the people of our region and beyond. That happens in all sorts of ways. One of the ways ETSU goes beyond expectations is the way in which our faculty work with and support students. Jack Tottle epitomizes that important tradition.  With the ‘80s and ‘90s Alum bands, the Old Time Band and current ETSU Bluegrass Bands all playing, it was as much a night of music as speeches. Backstage, old friends caught up, new friends were made and the legacy of one very special teacher’s program was measured in very concrete ways. “A doghouse bass you don’t see every day,” Chesney marveled. “And some of the very best banjo and mandolin players are all here, all doing the same thing I am: honoring Jack – now Doctor Jack – Tottle. To show the current students and young people who’re coming up not just what can happen, or what excellence is, but how much joy music can give you? To me, that’s worth everything I learned here.”