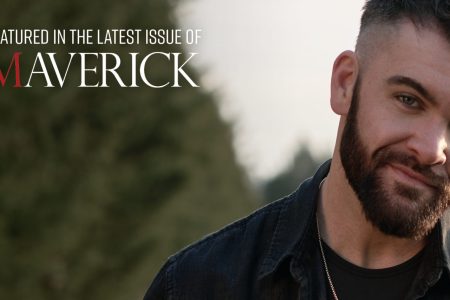 Dylan Scott hails from a small town named Bastrop located in Northeast Louisiana.  He was raised on traditional country music because his father once chased the Nashville music dream as a guitarist for Freddie Fender and others.  Now it’s Dylan’s turn and the move to Nashville has helped give his music and songwriting edge and focus.  His song “My Girl” achieved Platinum certification and his single ‘Hooked” went Gold.  Maverick Country recently caught up with Dylan to talk about his latest EP “Nothing to Do Town,” his music path and future plans.

Maverick Country:  Does your new “Nothing to Do” EP seem even more personal than your past releases?

Dylan Scott:  I kind of like to write songs that reflect my life and stuff I’ve been through. You don’t hear a lot of party songs from me because I’m not a big partier I’m a family guy.  My wife and I have been together since we were 15 years old, I’ve got a couple of kids a little boy and a little girl.  So, I like to write about stuff that I can relate to, but at the same time I also gotta think about the listeners so they relate to it.  And I feel like a lot of people can.  It’s real-life!

MC:  How did you convince your wife to be in the video for “Nobody” that released this past December?

DS:  It didn’t take much convincing.  I just said “Hey look here in a couple of weeks you’re going to get dolled up and there are going to be a lot of cameras in your face and you just go with the flow.  Honestly that’s really what I did.  I didn’t give her too much information.  Because when you watch that music video you are seeing her honest reactions to videos that I took off of our cell phones and I gave to the producer.  Then he made a little collage of the videos and we’re watching them on a big screen. Those were all real-life reactions in the moment.  That’s how I wanted the whole video to be.  A lot of female fans have really liked this video and I think it’s cool.  I like it that I can show my life and people enjoy seeing what we do and the way we are.

MC:  How do you seamlessly play piano or guitar and sing? And which instrument do you write most of your songs on?

DS:  I write the most on a guitar.  Piano was the first instrument I ever learned, and I was probably four when I started messing around playing.  I don’t know piano quite as well as I do guitar.  And I don’t know guitar as well as some other people do.  My little brother is my lead guitar player in my band, and he is phenomenal.  He can play anything, he can play all the licks, he is great!  And I’m like man I wish I could do that.  I get by on the guitar and I get by on the piano.  I sit down and I play certain chords and I sing and that’s it.

MC:  How did you end up so drawn to the late Country Star Keith Whitley’s music?

DS:  Besides my Dad, and he was a musician as I was growing up, he lived in Nashville and played with Freddie Fender back in the day.  Besides my Dad, Keith Whitley was my hero.  He was one of my first albums I ever got, and I just remember listening to that album and listening to his voice.  Something about his voice and his melodies.  Because I was too young to realize what the lyrics meant like “Don’t Close Your Eyes.”  The lyrics and the tone of his voice were what captured me.  I remember as a young kid sitting on the end of my bed playing old Keith Whitely songs and thinking about moving to Nashville.  Thinking about being on the Grand Ole Opry and all.  And now I’ve done that.  He’s one of the reasons, besides my dad, that I moved to Nashville and chased this dream and sing.

MC:  What was it like to have Lorrie Morgan, Keith Whitley’s widow, perform on your Keith Whitley tribute EP “An Old Memory?”

DS:  Having Lorrie Morgan come in and sing on “Tell Lorrie I Love Her” still gives me chills right now.  It was a crazy moment.  She was as nice as she could be, and she was all about the project.  Even now when I look back it is special.  But I know one day when I look back years from now, I’ll be like “Man I can’t believe we actually got to do that.”  And if you’ve listened to Keith’s recording of that song you know there isn’t a full production version of it.  She (Lorrie Morgan) was telling a story in the studio the day we were recording that he (Keith Whitley) came home and he was literally sitting at the kitchen table in nothing but his boxer shorts.  She was in the kitchen and their little girl was watching TV in the background.  And he had his guitar there and his boxer shorts and he reached down with his big toe and pressed record on a tape recorder, and he sang that. And that’s what you hear.  They said he had to take that cut to the studio, and they had to get rid of some of the background noise of the TV and their little girl playing.  It’s just such a cool story.  That’s stuff right there that I’ll never forget.

MC:  When you were a toddler your father noticed that you had a natural gift to sing on pitch.  What parallels do you see with your own son Beckett now?

DS:  My Dad was my biggest critic and my biggest supporter.  I would be playing guitar in my room and he would walk in and say, “You’re over singing” and just shut the door.  And that’s all he would tell me and it’s like “Thanks Dad I thought I sounded good.”  But it’s because of him that made me better.  I remember my Dad telling my Mom “I think he can sing and he’s staying on key.”  There’s video of me at three years old singing “I like My Women Just a Little on the Trashy Side.”  My Mom was not proud of her three-year-old or her husband for letting me sing that at three years old.  But my son is the same way he can find a key.  If there is a song, he finds the right key and sings it and it sounds great!  I’ve noticed he also has rhythm if there is a beat going, he can stay on time.  I think he’s got a little bit in him I’ll be honest with you.  He definitely steals my spotlight on social media and I’m not mad about it.  Every time I post Beckett my numbers go up and that’s all I can ask for! I have had several radio and media outlets ask if Beckett could please join Dylan for an upcoming interview so he can play music.

MC:  You were born and raised in Louisiana and started with a more Traditional Country feel.  Do you think your sound changed since moving to Nashville TN?

DS:  I moved to Nashville at nineteen years old right out of high school, didn’t go to college and didn’t know anyone up here.  My Dad helped me get to Nashville.  When you’re growing up you try to do things to make your Dad proud.  And playing old school Country Music made him proud and that is what I grew up on.  But when I got up to here (Nashville) and started writing and seeing what was going on in the current music state I realized if I want to be relevant, I’ve got to find me.  I’ve got to find who I am.  I don’t mean get rid of all the traditional stuff but find the stuff that I like.  So, that’s what I did.  I really enjoy what is going on in Country Music right now.  A lot of people have their opinions, but I think it’s really cool we can sing about anything we want.  Then I can turn around and do a Keith Whitley tribute album or during my live show do an old school Country cover.  I did take things a little more edgier and I realized if you want to stay current you must sing current.

MC:   Your voice seems to reflect more of your influences and pop flavor than Louisiana vocal styles?

DS:  I grew up in North Louisiana and there wasn’t much Cajun flair in the north, so I didn’t grow up on a bunch of creole stuff.  We listened to the country station and if a commercial came on or a song we didn’t care for we would flip over to the Pop station or from there go to the Hip Hop station.  It was like a melting pot we listened to everything.  I feel like a lot of people did, especially ones in my era.  There’re are a lot of influences going on there from Merle Haggard, Keith Whitley to Maroon 5, Kings of Leon to even some Hip-Hop.

MC:  When you were young how did you make the choice between pursuing sports or music?

DS:  I looked around when I was in 11th grade and I realized old Dylan wasn’t going to get any taller.  I’m about 5’ 10” on a good day, so basketball was out of the question.  I really just played basketball growing up.  I’m not tall enough, I love music and I felt like that is what I was put here to do.  I never wanted to pursue sports at all I just loved playing it in school with my friends.  I wasn’t the all-star athlete, but I loved playing and we had a good time.  From the time I was in 1st or 2nd grade I didn’t know where Nashville was, I just heard my Dad talk about it and I knew that’s where I was going to go.  That’s what I was going to do and that’s where I was going to live, and I was going to sing music.

READ THE FULL INTERVIEW IN THE MARCH/APRIL ISSUE OF MAVERICK MAGAZINE. GET YOUR COPY HERE!