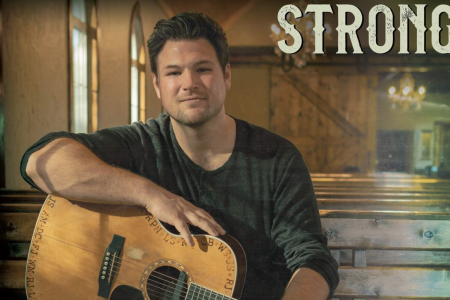 Ian Flanigan was the runner-up on the 19th season of The Voice USA. Now, Flanigan has just released his new album ‘Strong’ and there’s a song on there that features Blake Shelton.

First song that you learned all the words to?

For me, it would be Blaze Foley, probably ‘Clay Pigeons’. Just because when I personally think of touring I’m always thinking of like West Texas. I got my start out there and those long highways and Blaze Foley on the radio, for me that’s what it is.

This is where my brain has it’s limits. I gotta say probably Hotel California or D’yer Mak’er by Led Zeppelin. I think I played that song more than anybody.

A live show that changed your life?

I was fortunate enough to be on the TV show, The Voice. But before that, the show that changed my life was, I did a guest appearance for Bob Schneider at Austin City Limits. And that was my first time as an independent artist on a really big stage like that.

Probably some random song from high school. I think I can listen to any song at any time though.

I grew up with two records that my father played a lot. I had the box set of Creedance Clearwater Revival as a kid and John Fogarty and I’d say I had an Eric Clapton album unplugged when I was a kid that really guided me to be an Acoustic Guitarist.

How did The Voice shape you as a musician?

It was such a humbling experience. It was a real learning experience for me, because I’d been touring for so long but it gives you an insight into the working on a whole different level. Normal touring, where you’re just doing live shows, it’s a whole different world than like TV or production. So I think it changed me as an artist by getting a better perspective of the back end of it, and all that’s going on.

Tell me about your song ‘Grow Up’ with Blake Shelton?

About two weeks after the finale, I was back on tour and traveling to Texas when I got a call from Reviver music group. They wanted to see if I was interested in doing a single. So I’d written a bunch of songs, I picked through a bunch of songs and listening to ‘Grow Up’, we just decided, this is a really fun, different kind of country song that just wants to celebrate where you are in life. No matter where that is, it’s time to feel good and celebrate. When we picked it, we sent it to Blake just to get his input just as a friend. That’s where he was kind enough to jump in and say, what if I jumped on this song and featured on it? It’s really just a simple message of pausing life and just celebrating where you’re at right now presently.