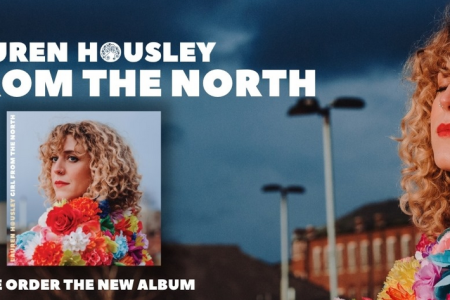 After moving back home to Sheffield and setting up a studio with her Husband, Lauren Housley drew on a wide range of different influences and experiences to put together her latest album ‘Girl From The North’ due out April 23rd.

What was the first song you learnt the words to?

I think it was Killing Me Softly, I was about eight years old but it’s still one of my favourite songs of all time. We still had cassettes when I was growing up, this was the Fugees version, I would write a lyric down then rewind the cassette and write the next line down and that’s how I would learn the lyrics to the songs.

Fleetwood Mac, the Rumours album! We’ve often put it on whilst travelling to shows to get us in the mood. I saw The Lumineers a few years ago supporting The Civil Wars, it was the first time I’d seen them live and they walked out on stage to The Chain and that really gets you in the mood for a gig.

A live show that changed your life?

I used to work at The Sage in Gateshead so I was really lucky, I got to see a lot of great gigs. However, I think the one that springs to mind I actually saw down in London, it was Amos Lee around five years ago. He’d just released his Mountains of Sorrow album so I was expecting a lot of that stuff but he did a lot of his older stuff too. The way he pieced that show together totally blew me away. He has a really great band and he came out with a bit of a Johnny Cash vibe going on and then finished the show with an old R&B classic – the show just really worked as a whole. There were times when he was left on stage on his own, just him and his guitar for songs like A Change is Gonna Come. He kept the audience so engaged.

Show me Heaven, I always loved that song but it used to get played in Assembly at school as we walked in. There was that song and Circles in the Sand and I used to think, ‘these are great songs’. I was around six or seven, I was in infant school as I remember walking in in funky slippers and those songs would be playing in the background.

There’s a heartbreaking song on the last Johnny Cash album that he released before he died, it’s called Hurt. His performance on that song… it makes me cry just thinking about it – its amazing but it’s heartbreaking and I do find it hard to listen to it.

Carol King’s ‘Tapestry’ album. I recently did a show at the Sound Lounge curated by Paul Sexton in celebration of the album turning 50, so I got to play a couple of songs off that record. I remember Will You Still Love Me Tomorrow being played a lot when I was a kid and when I heard the album from start to finish I remember thinking, ‘how can you write this many great songs and have them on one album?’

READ THE FULL INTERVIEW IN THE LATEST ISSUE OF MAVERICK MAGAZINE! GET YOUR COPY HERE!