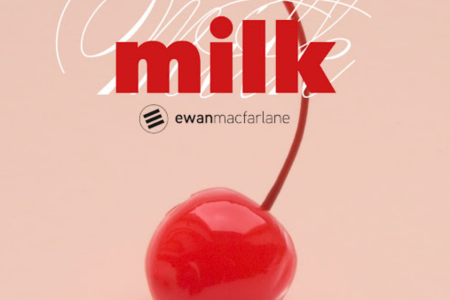 Ewan Macfarlane’s life is one that has been lived to the max. He was being managed by Bill Curbishley (The Who) when a quick visit to see Apollo 440 in the studio resulted in a creative connection with the group that lasted some 20+ years. Their time together ended when he played his final show with them in front of 30,000 people in Seville. During that time, he won further acclaim with the rootsy rock ‘n’ roll and searing soul of The Grim Northern Social.

After Seville, Ewan re-emerged out of the blue with the Petty/Springsteen style of his highly acclaimed debut solo album ‘Always Everlong’ in 2021. And continuing that prolific solo spell with barely a breather in-between, he’s already preparing its follow-up for release less than a year later: ‘Milk’.

A record that finds an artist pushing himself into new territory and throwing another fascinating curveball, ‘Milk’ is unlike anything Ewan has made before. Fourteen songs ultimately dedicated to his soulmate, Jo; they collectively make for an album that explores love and all of the roller-coaster notions that come with it. As Ewan explains:

“‘Milk’ is a concept album all about the same woman, my wife Jo. I suppose a modern take on a love album, with twists and turns. It’s about  all the highs and lows of love, lust and passion, and one that I believe many people will relate to. For me personally it’s the best piece of work I’ve done to date.  Everything about this record just flowed from start to finish with regards to the process. I’m very proud of the product.”

Nestled amongst songs of love, there are numerous references to Ewan’s other burning passion: music. Referencing greats old and new, from interstellar trailblazers like Ziggy Stardust (“Love & The Lonely”) to Scottish risers The Snuts (“Won’t Stop Burnin’), there’s even a song that pays gentle homage to the genius of Al Green (“When Al Green Sings”). While still rooted in the Americana touchstones of his debut, flashes of The Replacements, Foo Fighters, Arctic Monkeys, Rodriguez, Aerosmith, The Clash and Lucero are all detectable in its heady mix; a testament to an artist with an enthusiasm for rock music in all its eclectic and energising forms.

With his persistent, near-obsessive approach to making music still his driving force, Ewan began writing and recording new material almost immediately after the release of his acclaimed debut ‘Always Everlong’. Honing this new clutch of songs almost relentlessly since, the resultant record, ‘Milk’, was recorded, produced and performed almost exclusively from his Royale Stag studio at home in Scotland. With additional bass parts added by Andy McCafferty, the record was given its final mix by friend and bandmate Ashley Krajewski (of Apollo 440) and mastered by Chris Pavey.

Honest, humbling and often humorous songs that, like love, reveal more the better you get to know them; ‘Milk’ will be released on 28 October 2022, via Royale Stag Records.