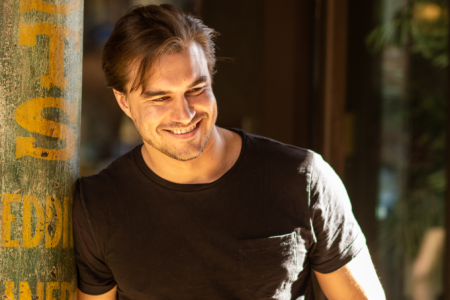 LA based actor/country singer Rob Mayes has just released the video to his latest track, ‘Closer’ (which you can see below) and spoke to Maverick about the video and what he’s got coming up in the near future
[wpdevart_youtube]Ogf2IDP1d54[/wpdevart_youtube]

The video for Closer is now out, what was it like to film?
We had so much fun, me and Ana (Kharisova Carter, co-star) and Christine (Solomon, director). We shot in Griffith Park and all around the valley in LA and Malibu, and even up and down the PCH in my friend Andrea’s Jeep.
Most of the video was shot on the iPhone XS Max with additional shots with the Sony Alpha. We just wanted to hit up some spots we love and to keep it simple, fun and light.
You said that you wanted to take the viewer on a date to all your favourite locations in LA – where did the idea come from to do that?
When coming up with ideas for concept for a video, there are many different ways you can go. Do we shoot black and white? Use projection overlays? Instead of going in a more abstract, arty direction, Christine and I thought let’s make this less of a ‘film’ and more ‘hey, why don’t we just have some fun and make it feel like we are taking the viewer on a day date around LA?’
We didn’t really want to make it overwrought, just make it a good time with cool spots and to make it feel accessible and easy. I didn’t want the video to take away from the song. I just wanted it to give the song some context.
That said, my friends over at The Picture Shop elevated the video to a whole new level in the editing bay. I can’t thank Tom Kendall and his team enough.
You’ve already had a few singles out recently, can you tell us a bit more about your upcoming EP?
My next single Kiss The Night comes out on August 23 and the following single We’ll See on September 6…all leading up to the EP on September 20! It’s been a long time coming, we’ve put a lot of work into the music and trying come up with the best release plan. I think so far so good!
I’m excited to keep sharing music and for you guys to hear the new stuff over the next few weeks and the music I’ve been working on that will follow that.
What was it like to head into a studio and record?
It’s really my favourite thing. Writing a song is an amazing process. Sometimes short and easy and boom, but other times it’s an arduous process that can take months or years.
But then once you’ve got the song(s) and you get into the studio, a whole new level of creativity opens up. The instrumentation, the bpm, what I do vocally. Making those decisions, for me, is the most exciting part of making music – being in that booth and really bringing the song to life.
Aside from the EP, what have you got coming up over the next few months?
I just finished a movie with Marla Sokoloff and Marie Osmond called ‘The Road Home For Christmas’, which is due out this holiday season on Lifetime. I’m excited to have been asked to do another Christmas movie this year, I had two last year premiere on Lifetime and this current one is about a musician trying to make it.
It takes us on a road trip from New Orleans, one of my favourite cities for food, for spirit, for music, all the way up to Akron, Ohio. I’m from Cleveland, so it’s a bit reflecting my own life!
I also have a holiday song I’m looking to release in tandem with the movie. I was just in the booth for ADR on my western that I did with Val Kilmer and Jake Busey, Annalynne McCord – that will be due out later this year. I’ve got a thriller ‘The House on the Hill’ with Samaire Armstrong coming out soon and another music, road trip movie ‘Maybe I’m Fine’.
It’s really cool that there has been so much recent overlap between my music and my movies lately. I would love to take the new music on the road and do my own small road trip tour in the coming months if my schedule will allow!