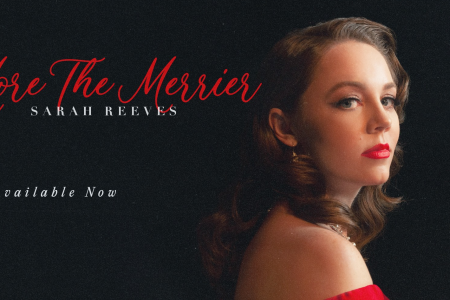 I knew from a pretty young age that I wanted to do music. I grew up in a family of musicians. My dad was a producer, I grew up going to the studio with him. So I was always around musicians. He ended up building us a studio by our house, we lived out in the country in Alabama. My older brother, he played guitar, bass and drums, and I was always in bands with him. Then my two little sisters, they also are into music as well, they both sing and play instruments. So it was just like in our blood from the very beginning. As soon as I graduated high school, I went straight into signing my first record deal when I was 18 and it’s been a pretty wild journey ever since.

You mentioned your dad’s work there, what did your parents play to you growing up?

I really love the originals on this record, what’s your songwriting process like?

I’m always singing melodies, melodies come first for me. I’ll just record it on my voice memo on my phone, then that will sometimes spark an idea. I’ll take it into a session with a producer or other co writers and we’ll just kind of start vibing. I also have a list of titles in my phone, so when I can’t think of anything, I’ll just go to my titles. It depends on who I’m working with, as well. So for this Christmas album, it was very interesting, because I wanted to write originals that also stood in line with the covers. When I think of Christmas, the music that I listened to around Christmas is like the classics, Ella Fitzgerald, Nat King Cole, Bing Crosby. When I wrote these originals for the Christmas album, I wanted them to sound like they came out of that era.

My favourite song on the record is ‘Sentimental’, tell me the story behind that song?

I wrote sentimental with a few people in Nashville, Tennessee, in May or June, it was very hot. My mind has been in holiday mode, even though it’s been hot outside. I go into the studio, and we have this TV monitor and we put the virtual fireplace on Netflix, you feel instantly cosy. We just started talking about Christmas, I explained my vision, wanting it to feel still very classic and timeless. Someone in the room said the word sentimental. And I was like, Yes, that’s the title of the song, let’s build everything around that title. I wanted to create something that gives you that magical, warm, cosy feeling of Christmas. It’s my favourite song on the Christmas album, so I’m glad you asked about that one.

I love the arrangement that you’ve used, you had a live Jazz band, tell me what it was like working with them?

The way that I make music on a daily basis is mainly keyboard and a guitar and then everything else is programmed. With this record, I knew in order for it to be that nostalgic sound, we needed the real thing. So we rented out a studio in Nashville, with an amazing grand piano and we decided to bring live professional jazz musicians into the studio. We had done some pre-production so we knew the vision of the songs and they gave the songs one, maybe two listens and they just nail it first time. Like, they nail it the first time. It just adds so much, there’s this realness to it that you don’t get from a computer.

Are there any Christmas traditions you had when you was younger that you’ve kept up in adult life?

I think as far as traditions go, the one thing that I think about is food. That’s just something that we always have to have, the same meal on Thanksgiving and Christmas. I love to cook and so I have this recipe that I found with this Sous Vide cooking method. So I started making beef tenderloin for Christmases. I’m the one that makes it now which usually, I wouldn’t be the cook but as I’ve gotten older, I’ve just kind of taken that on. We have all the sides like brussel sprouts and potatoes and pumpkin pies and cheese cakes. We’re just always cooking and baking, that’s my favourite tradition to do with my family and my friends. Put the vinyl on and eat good food.

What’s your favourite Christmas present that you’ve ever received?

Growing up, I always told my parents, I want a Barbie car. That was the ultimate Christmas present as a kid. What’s funny is my parents never got me a Barbie car, instead, every Christmas they would give me a microphone or a karaoke machine or a keyboard. Everything was musical instruments. Then my sisters got the Barbie car, but I will say, I’m so thankful that my parents kept giving me musical instruments because I used that, obviously, up until now. I’m still using those same keyboards and some of the things that they bought me when I was a kid, because that’s what brought me here.

I’m in LA right now working on my next album. I’m always like thinking six months to a year ahead. I’m hoping to get some new music out pretty early next year, maybe the spring. I had to force myself to rest the past couple of months, just because I’ve been going so hard. I feel like I’m back in the flow, I’m inspired again, and I’m writing songs that I’m really excited about for the next chapter of music.