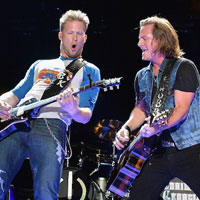 There is no stopping Florida Georgia Line. They are flying along at high speed â€” and gaining momentum. The popular duoâ€™s debut single â€˜Cruiseâ€™ has just made more country chart history entering into its 17th week (four months!) on top of the Billboard Hot Country Songs chart. The group, comprised of Tyler Hubbard and Brian Kelley, are holding steady at 17 weeks â€” the longest any song has held that same position in 50 years. And, they may be poised to tie a record set in 1962 by country music singer Leroy Van Dyke and his hit â€˜Walk on By,â€™ which spent 19 weeks at No. 1 on the charts, according to Roughstock. If FGL keep up steam, they may even approach the all-time record for most-weeks at No. 1 on the Billboard Hot Country charts, which is 21 weeks, shared by three late country legends, Hank Snow, Eddy Arnold and Webb Pierce. When they were students at Belmont University, Hubbard and Kelley probably didnâ€™t even imagine their names would be alongside of some of the biggest country names in such a short amount of time. â€˜Cruiseâ€™ has been certified quadruple Platinum and has received so many accolades since it debuted. It set a chart record for most chart-topping weeks for a song by a duo, snagged the Breakthrough Music Video of the Year at the 2013 CMT Music Awards and has been the song at a variety of high profile events â€” from â€˜The Voiceâ€™ season finale to the closing song at the CMTs. The FGL guys began their music career with attention that many artists only dream of. Thereâ€™s lots of buzz about this duo â€” and for good reason. Congratulations to this hard-working, record-breaking team!