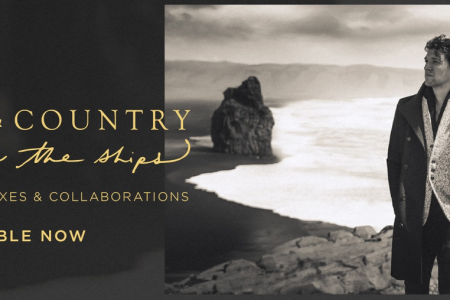 Almost a whole year has passed since for KING & COUNTRY last played an arena show. The Covid 19 pandemic has had a detrimental affect on the live music sector and on some of the artists careers, others however have risen magnificently from the ashes. Joel and Luke Smallbone have not dwelled on what they haven’t been able to do during this time but instead have focused on what they can do. The fruitful year of 2020 began for the boys last January when they took home two Grammy’s; one for ‘Best Contemporary Christian Music Performance’ for their duet with Dolly Parton on ‘God Only Knows’ and one for ‘Best Contemporary Christian Music Album’ for their record ‘Burn The Ships’. Not long after this victory, the pair, like many others would have their tour cut short and would return home indefinitely. The World as we knew it was changing drastically but as everyone was encouraged to keep apart, Joel and Luke – who make up the duo, looked at ways they could bring people together.

The brothers were in a fortunate position when the world shut down, both were returning home to a supportive family and Joel acknowledged that, “Family has been magnificent in this time, I almost have a little embarrassment in saying family has been so wonderful because for so many it’s been so difficult.” Joel married fellow Contemporary Christian artist Moriah Peters in 2013 but due to the nature of being touring musicians they have spent much of those seven years away from home. “My wife and I have travelled mutually for most of our marriage, so we’ve had more time now than we’ve ever had at home together.” Faith too, played an important role in getting Joel through the uncertainty of the situation – “Another synonym I would use for faith is hope, we all need a little bit of hope. So we’re looking into the future and we can either look into it with a bleak outlook or we can have this anticipation that even through the suffering there will be good on the other-side.”

Despite enjoying a well earned break, with this positive attitude the pair were determined to pick up where they left off and continue to unite the World with their music. “In such a desperate time as this, to be able to offer music – to create it, to release it – it’s profound to have that opportunity.” A number of projects began to bubble just below the surface. First came a song that had been in the writing process long before ‘Burn The Ships’ was first released. ‘Together’ would see the Smallbone brothers team up with Tori Kelly and Kirk Franklin, for the first instalment. They debuted it on a live stream event dubbed ‘Together: A Night of Hope’ which attracted 90,000 live impressions across social media and sent the song racing up the Billboard Christian music charts. It seems Luke was right when he said “I think that song is for this moment – the pandemic”.

Although from the outside looking in, songwriting looks like it comes easy to the pair who often team up with such hitmakers as Josh Kerr, Jason Ingram and Ben Glover, Joel has a love-hate relationship with the craft. As he drove in to a songwriting session he said “We have a very temperamental relationship, writing and I, it’s one of the most gratifying things you can do in your career. It can also be some of the most embarrassing, humbling and difficult moments because when you break it down you’re dealing with something invisible and something very spiritual – you’re pulling all these melodies and ideas out of nowhere. It’s actually a beautiful, sanctifying process because we do a lot of co-writes and in that you have to stay very humble with the whole room. Unless you have an idea of what you want to present, it’s hard to have an emotional connection to a song. So songwriting is a friend and a foe for me, a lover and an enemy.”
He divulges the process behind one of their most popular hits, certainly amongst country music fans – the grammy award winning collaboration with Dolly Parton. “God Only Knows was a phrase I had written down that I always found very ironic. Americans throw it around very flippantly ‘God only knows why this crap happened’. So I started to peel back the layers of the phrase and this interesting idea that there is a lot of things that God only knows and yet he still loves us, accepts us, cheers us on and wants to be connected with us.” Little did he know as he sat in that writing room that day, just where that idea would take them. “Dolly was just marvellous, they say don’t meet your heroes but if this is anything to go by then definitely meet your heroes!” The collaboration that followed not only introduced them to the legendary singer and helped to bag them another Grammy, but it opened a whole World of possibilities within country music – a genre they had grown up surrounded by but never really explored. “It was a bit like living next to the beach, but never going and then all of a sudden you move away from it and you realise how wonderful it was. In this case, we grew up in the country music capital of the World with all of these wonderfully gifted people living down the street from us and it wasn’t until we collaborated with Dolly – I mean what a marvellous way to be introduced to the country music community – but it wasn’t until then that we found this beautiful affinity with members of the country music community and it opened pandora’s box for us.”

Country music and christianity have always had a strong relationship, so despite sonically being quite far removed from the country sound, their lyrical content had some overlaps. It wasn’t hard to imagine them following the rhinestones for a little while after the success of that song. They performed the hit at the CMA Awards alongside Parton and it was here that they first came into contact with their next collaborator from the country music community – Gabby Barrett. The collaboration features on their recent Christmas album, ‘A Drummer Boy Christmas’. However, it wasn’t easy; still in the midst of a pandemic the boys and Barrett had to find ways to get the song recorded without ever actually being in the same room, in fact they’ve never even met! “It was really interesting as we couldn’t meet up, so we were just able to toggle back and forth and send her a track and then she’d send something back and we’d send back again. We had this beautiful cyber collaboration and yet we’ve never been in the same room, apart from being in the Arena for those awards.” The Christmas album, which was a long time coming for the Australian duo, was highly successful and a drive-in tour followed. They partnered with The Salvation Army to raise money and collect toys for families in need during the holiday season.
The beginning of 2021 for KING & COUNTRY revealed just how passionate they were about creating music with other artists, across genres. They released two new singles. First, came a new version of Together, less than a year since its original release. This time Joel and Luke were joined by label mates Hannah Ellis and Jackson Michelson for the ‘country collaboration’. This single went a step further than the collaborations with previous country stars as the production was completely stripped down and replaced with banjos and pedal steels. This was closely followed by a new version of the song ‘Amen’. In the song about renaissance and renewal, the duo are joined by Lecrae and The WRLDFMS Tony Williams. Just when you were thinking, ‘my they have been busy’, they then made the announcement that the deluxe edition of ‘Burn The Ships’ would be coming out in March and it was to feature an array of collaborations and remixes.

Outside of the Box

This quest to bring people together has been genre-defying for the pair, “You never really want to be typecast do you? In anything, whether in film or in music” Joel remarked, “You just want to present a song – a love song, a break-up song or a song about God or anything in between and people to just resonate but often that’s not the case.” They have removed themselves from that box that we like to put artists in, and united a cast of names on the sleeve of a record, that you would never dream of picturing together! Once again, they’ve achieved unity in a World that has long stood divided and the magnitude of it, is not lost on either of them. “We have these opportunities to rub shoulders with Dolly Parton or Timbaland, to link arms for the greater good and say ‘hey we’re all in this together’. We’re from different walks of life, different nationalities, different ethnicities and different genres of music but we’re all supporting each other and lifting each other up. It’s been magical and I’m a very visual person, so to see it on the cover, all those talented names together in one spot for the first time was very exciting for me to take in.”

In some ways, their fluidity within music – the ability to stay true to their message whilst collaborating with a wide range of sonically different artists – comes from their early influences. Joel recalls what he listened to before the Australian’s moved with their family to the States. “I was a very heavy metal kid, there was an old rock band called Stryper, they had the spandex and the flowing mane and this elaborate artwork. My Dad toured with them in Australia so I had the chance to go to one of their shows and I thought their theatrics were really mesmerising.” Whilst on the other hand he also listened to gospel singers that incorporated spoken word into their performances. What did these influences have in common? Faith and theatrics, that’s what drew the boys in, which explains their own theatrical, high energy performances!

The record, which is set to be released on March 26th, sees the addition of the original version of ‘Together’ as well as their latest single ‘Amen (Reborn)’. It also has the original ‘God Only Knows’ as well as the version they did with Parton and a Timbaland remix of the 11 week number 1, featuring Echosmith. Already though, Joel and Luke are planning for the future, however that might look! “We’re working on a documentary as well as a pair of films that are in development; one is a musical called ‘Drummer Boy’ and the main focus is our fourth studio album. It’s more important that people have new music especially at this time. So our real focus is getting new music to people as quickly as possible!”
Whilst the duo are kept from the stage for the time being they reflect upon what it might be like when some sort of normality returns. “I think think the pandemic has really put a magnifying glass on live shows for everyone, it’s going to be such a magical time when they start up, I don’t think anyone will take it for granted again.” And whilst we wait for the boys to hit the road once again, they’ve provided us with the perfect soundtrack to shine a light in these dark, uncertain times.