A FORCE OF NATURE debut album from Sari Schorr out today 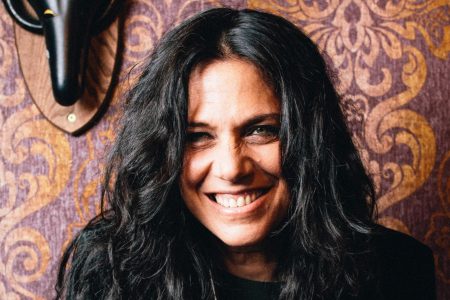 Manhaton Records is pleased to announce the debut album A FORCE OF NATURE from one of the most exciting Blues rock singers, Sari Schorr.  Released in the UK and Europe on September 2nd 2016, the album is produced by the legendary Mike Vernon whose credits include Fleetwood Mac, John Mayall & the Blues Breakers, David Bowie, Savoy Brown, Chicken Shack, Eric Clapton, Peter Green, Christine McVie and Ten Years After.
In January 2015, Mike received a Keeping the Blues Alive award at the prestigious International Blues Challenge in Memphis, Tennessee. The award was not the only highlight of the weekend for Mike. The second highlight occurred when Mike witnessed the performance of one of the most amazing female blues singers he’d seen in years – Sari Schorr.
Mike was so knocked out, he came out of semi-retirement to produce her new album.  Already a consummate songwriter in her own right, with tracks on major labels, Sari has written or co-written almost all the songs on the debut album.  Released by Manhaton Records (home of Robin Trower and King King) the new album features guitarists Walter Trout (John Mayall, Canned Heat), Innes Sibun (Robert Plant), Oli Brown (RavenEye) and keyboardist John Baggott (Massive Attack, Portishead).
New York-based Sari Schorr initially gained prominence throughout the blues world after several years of touring the US and Europe with Blues legend, Joe Louis Walker and renowned guitarist, Popa Chubby.  Schorr was recently inducted into the New York Blues Hall of Fame.
Sari has appeared on the Conan O’Brian Show, and has toured extensively throughout the US, Europe, Asia and Australia.  She has received critical acclaim for her blustery vocals and emotionally-charged performances, and is described by many blues pundits as a modern-day hybrid of Janis Joplin and Tina Turner – a red-hot blues mama who radiates emotional intensity, connects with and inspires her audiences, and leaves a lasting impression that’s larger than life.
Sari’s new band, The Engine Room, features stunning British guitarist Innes Sibun (former Robert Planet guitarist). “The Engine Room truly is a remarkable band,” says Sari.  “Something magical happens when we’re on stage together.  We’re fuelled further by the audiences’ reaction and everything’s possible. I love touring and enjoy the privilege of meeting so many like-minded people who share our love of the Blues.”
The album delivers hard-driving Blues-Rock, influenced by the late ’60s British Blues movement.  Sari (who trained as an opera singer) mixes Blues, Rock, and Soul with concrete melodies and poetic lyrics to striking effect.  Says Sari, “I set out to write achingly honest songs about the beauty and the tragedy of the human experience.  I hope my music can be a galvanizing force to inspire, repair and unite people.  I try not to allow constraints on my writing or my performance of the songs.  Most often, I manage to trust my intuition and honestly, Mike Vernon brings out the best in the artists he works with.”
“My songs are rooted in the blues and honouring that long tradition is important to me,” reflects Sari.  “My song-writing draws heavily on contrasting melodic hooks with aching harmonies.  I spend a lot of time working over and rewriting my lyrics.  I rely heavily on imagery and enjoy using double-entendres that are entertaining to those who catch them.  My influences are many and various and include Son House, Howlin’ Wolf, Muddy Waters, Lead Belly, Bessie Smith, Etta James, Ella Fitzgerald, Freddie King, Robert Johnson, B.B. King, Peter Green, Robert Plant, Martha Velez and Bob Dylan.”
“The album was written in four countries: US, UK, Spain, and Germany. Basic tracks were recorded in London and Seville.  I’m grateful to have such amazing musicians on the album, who gave so generously of their time and talents.  The album features the guitar mastery of Innes Sibun, Walter Trout and Oli Brown and stellar keyboard work by John Baggott.”
Sari mixes a passion for music and with a duty of social responsibility. She has devoted her talent and energy to music projects of a grand scale for humanitarian causes. Most notable is her work on a “Toast to Freedom” for Amnesty International, where she collaborated with many musical legends including Warren Haynes, Levon Helm, Keb Mo’, Taj Mahal, Eric Burdon and Carly Simon. Sari’s humanitarian efforts include work in Haiti and India. She founded “Matters” – a non-profit that draws attention to humanitarian causes through the arts.