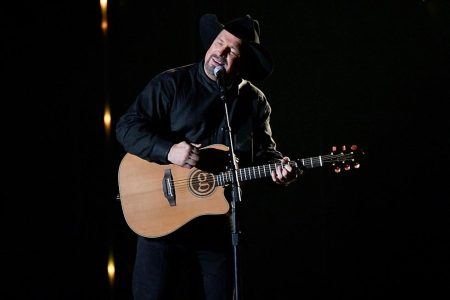 Garth Brooks is going live once again. During Tuesday (July 7) night’s Inside Studio G, the singer will take requests for his second acoustic concert since the coronavirus pandemic began.
The first was a hit, crashing the livestream and ultimately becoming a television special on CBS. Trisha Yearwood was a big part of that broadcast and figures to be involved in the next. She’s often a special guest on Inside Studio G, with the married stars trading questions, songs, stories and jokes.
For Tuesday night’s 7PM ET show, fans can tweet requests with the #GarthRequestLive2 hashtag and his team will filter through to arrange something of a setlist.
Throughout the coronavirus pandemic, Brooks has continued with Inside Studio G. In addition to the two acoustic concerts, he put on a drive-in movie theater concert last Saturday (June 27) that aired on more than 300 drive-in screens nationwide. Fans mostly enjoyed the night, but it wasn’t perfect. Audio issues plagued some venues, and his produced video performance disappointed others.
It’s as close as they’ll get to Brooks — or any other major country star — in 2020, however. The touring industry has been shot down due to the pandemic, leaving artists to find creative ways to get music to fans and recoup lost income. The 58-year-old Brooks’ last radio single was “Dive Bar” with Blake Shelton. He dropped “We Belong to Each Other” last month, but it’s not clear if it will be promoted at radio, despite seeming on topic with the national conversation.
See more news here.