Getting to know your CMA Songwriters 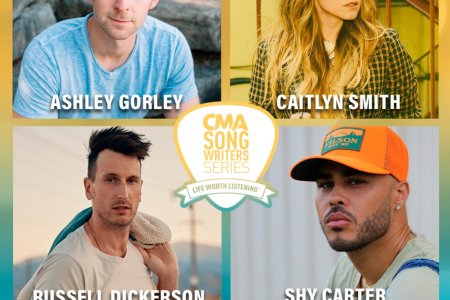 After much speculation as to whether it would go ahead this year, the CMA Songwriters, that takes place the night before Country 2 Country, has been announced! So far four names have been announced in what appears to be another stellar line-up. A couple of names jumped out to me, being the songwriting fan that I am, Shy Carter and Ashley Gorley – two of the very best in the business – but some won’t have heard of these guys before, though I’m sure you will have heard their songs!

When it comes to hit songwriters, there’s no one more qualified than Ashley Gorley who has made history by racking up 55 #1’s! Now he won’t have time that night to play them all of course but you’ll certainly hear hit after hit from this esteemed writer who began his career as an intern, typing up song lyrics for demo’s that staff writers at publishing houses across Nashville had submitted. Gorley set up his own publishing company called Tape Room Music and his writers have themselves amassed 27 #1’s since it’s inception in 2011. As for Gorley himself, he has been named ASCAP Country Songwriter of the Year eight times! Some of his number one’s include ‘Then’ by Brad Paisley, ‘You’re Gonna Miss This’ by Trace Adkins, ‘Good Girl’ by Carrie Underwood and ‘Play It Again’ by Luke Bryan. He’s also had chart toppers sung by this years C2C artists including Darius Rucker’s ‘Won’t be Like This for Long’. The show is worth attending just for Gorley alone but with three other prolific writers still to introduce you to, I think you’ll be in for a good night!

I wouldn’t be surprised to see Smith announced as one of the spotlight stage artists, she is a fantastic singer songwriter with a couple of studio albums of her own under her belt. However, let’s take a quick look at her writing credits for other artists because honestly, these names are impressive! One of her earliest cuts came in 2013 when arguably the King and Queen of country, Kenny Rogers and Dolly Parton, reunited on ‘You Can’t Make Old Friends’ a song Smith wrote with Ryan Hanna King and Don Schlitz. Later that year Cassadee Pope would release ‘Wasting All These Tears’ as a top 5 single before Smith’s collaboration with Cary Barlowe and Steve Robson ‘Hypnotizing’ would be placed in the TV show Nashville. It wouldn’t be her only song to feature on the show with the main character, Juliet Barnes played by Hayden Panettiere, singing another of her songs in the second season, ‘Don’t Put Dirt On My Grave Just Yet’. Slightly outside of the country genre, Meghan Trainor and John Legend took her song ‘Like I’m Gonna Lose You’ to the number one spot on the US Adult Top 40.

A graduate of Nashville’s prestigious Belmont University, Dickerson broke onto the scene in around 2016, opening for the likes of David Nail and Thomas Rhett. His breakthrough single ‘Yours’ was a massive hit, topping the charts and being certified 3x Platinum. It’s one of the wedding songs of the decade, often being used as a first dance song. His next three singles would all go on to claim the top spot and certify Dickerson as a serious contender within country music. He is performing on the main stage at C2C but this is a chance to see the hit-making heart throb in a more intimate setting where you’ll hear the stories of how those songs came about. He’s sure to be a fan favourite amongst the UK crowd.

I’m really excited to see Shy Carter. He’s one of the most versatile songwriters you’ll meet, he’s written for a range of artists across genres and is a record producer and rapper. Outside of the genre, he’s written for Meghan Trainor, Charlie Puth and Jason Derulo and that pop sensibility within his songwriting he carries across into his country music too. One of his breakthrough hits in the genre was ‘Stuck Like Glue’ by Sugarland, which he co-wrote with the duo along with Kevin Griffin from the band Better Than Ezra. He went on to write for Keith Urban including ‘Never Comin Down’ from the Graffiti U album and setting a slightly different tone, he wrote ‘Speak to a Girl’ from Faith Hill and Tim McGraw’s last album. He has also written for Kane Brown and Chris Janson. Carter is a performer in his own right, having released a number of singles himself and following C2C he’ll be heading out on tour with Sam Hunt.