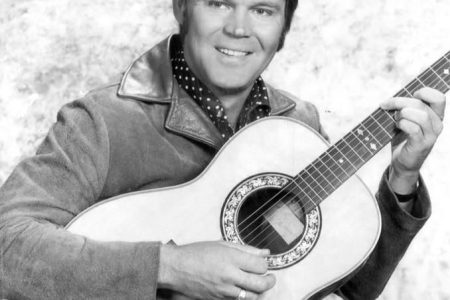 Glen Campbell, the legendary Country artist behind hits including ‘Rhinestone Cowboy’ and “Country Boy”, has died following a lengthy battle with Alzheimer’s disease.
A man of astonishing talent and persona, the singer and musician is well known for his extraordinary musical abilities, which one year saw him outsell the Beetles in record numbers.
In a statement issued today, the family of the iconic singer/musician, said:

“It is with the heaviest of hearts that we announce the passing of our beloved husband, father, grandfather, and legendary singer and guitarist, Glen Travis Campbell, at the age of 81, following his long and courageous battle with Alzheimer’s disease.”

Campbell’s first epic hit was in 1967 with “By the Time I Get to Phoenix,” which was written by Jimmy Webb. The slow, smooth and sentimental song proved perfect for Campbell’s vocal range, drawing wide attention from audiences.
Not long afterwards, ballads such as Galveston came into fruition, reverberating with imagery of war and the memory of a soldier leaving behind his sweetheart. Wichita Lineman – another major hit for Cambell and his first Top 10 – was also the result of the musical match-made in heaven between Campbell and Webb, with Campbell utilising his distinctive vocals.

In 1968, Campbell won Grammy Awards in both the Country and Pop music categories, including Best Country & Western Solo Vocal Performance, Male, Best Country & Western Song and Best Vocal Performance, Male. It marked a clear distinction for Campbell’s musical skill: his unique ability to merge aspects of Pop and Country, blending characteristics of the two genres into a seamless blend, with each melody complimenting the two categories.
It is one of the factors that led to the  extraordinary success of ‘Wichita Lineman’, considered a benchmark in Country music history.

In the middle of 1968, Campbell guest hosted the Smothers Brothers Comedy Hour, which was met with such  an eager response from audiences that between 1969 and 1972, a show designed for the start came into existence in the form of theGlen Campbell Goodtime Hour variety show.

Artists and musicians from Ray Charles and Johnny Cash to Linda Ronstadt came to perform on the show, which presented a platform for a number of other ascending County singers such as Willie Nelson.

Campbell first began playing guitar as a school boy and is reported to have been obsessed with jazz guitarist Django Reinhardt. At 14 years old, the aspiring musician dropped out of school and set off for Wyoming, where he and an uncle began playing gigs in remote bars. By 1962, he had already earned a place in the Wrecking Crew, formed of a group of session pros. In 1963 he appeared on 586 cuts, including Elvis Presley’s “Viva Las Vegas,” and the Righteous Brothers’ “You’ve Lost That Lovin’ Feeling.”
Amongst Campbell’s other major accomplishments was replacing Brian Wilson on bass in the Beach Boys in 1964. A year afterwards, Wilson famously stated that “The people who are advocating burning draft cards should be hung.” Five years later, Campbell co-starred in True Grit at the recommendation of John Wayne.
Campbell’s career was rich in highs but was not without low points; his first feature film, 1970’s Norwood proved to be a disaster, whilst his show was also cancelled. But Campbell proved his commitment to doing what he was best at and emerged undefeated when in 1975 Rhinestone Cowboy emerged. It was followed by other Country hits, such as “Country Boy (You Got Your Feet in L.A.”) and “Southern Nights” and in the Nineties he opened the Glen Campbell Goodtime Theatre in Missouri.

Campbell was married four times, and has eight children, including five sons and three daughters. In the early 1980s Campbell made headlines when it was revealed that the artist was in a  relationship with country singer Tanya Tucker – 22 years his junior. Battling alcohol and cocaine addiction at the time, in 1982, Campbell instead married Kimberly Woollen who had helped the star get his life back on track. Nonetheless, a run-in with the law came in 2003 when Campbell was jailed for 10 days for extreme drunken driving and leaving the scene of an accident.

Glen Campbell’s career spanned more than  sixty years, during which time he sold more than 45 million records worldwide. Diagnosed in 2011 with Alzheimer’s, the singer went onto play 151 shows with the care and support of his devoted family, before retiring from music as a direct result of the disease. A film-crew documented his final 2014 tour, resulting in the award winning ‘I’ll Be Me’. It was a decision that made President Clinton claim that it would be his role in bringing awareness to the condition that would keep him enshrined in peoples’ memories, even more so than his music.
The much-loved artist spent his final years in an assisted living facility, where friends and relatives would play him his own songs.
Campbell’s final original music album Ghost on the Canvas  consisted of guest stars Billy Corgan, Paul Westerberg and Jakob Dylan. Early this year, Adiós – his final studio album –  was released, made up predominantly of cover songs by Bob Dylan, Harry Nilsson and others, all recorded after his Goodbye Tour.


Speaking to Fox News, Rock ‘n’ Roll star Alice Cooper named Campbell one of the “Most unique Guys” and a “premier guitar player in Rock and Country”. Campbell will forever be remembered in Country music as a man of talent, dedication and intrigue – a gifted individual who not only helped shape the genre, but brought to audiences’ attention the talents of multiple other noteworthy Country musicians. His music and legacy will live on.