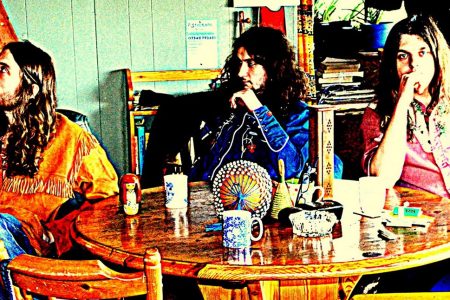 Tucked away amongst the wild hillside pines of North Wales, sits an old weather beaten, rust eaten showman’s wagon, gently swaying and creaking with the warm, low hum of sweet dreams and two four blues. The Goat Roper Rodeo Band are preparing to take their show on the road with their brand new LP ‘COSMIC COUNTRY BLUE’ released on October 7, 2016, through Aveline Records.
The bands impressive second album was produced by Romeo Stodart (Magic Numbers) at Doghouse Studios in London and mastered at Abbey Road Studios.With just two old guitars, an upright bass and a bucket full of rich, aching harmony, the band preach foot-stomping country blues like you’ve never heard before. There’s a hint of Hank, a twist of Waylon and a little sprinkling of demanded country-blues trios around.
Gram in there too… it’s up and down, soft and loud and it swings that big ol’ country snake. Just three young bucks doing their own thing … the only way they know how.
The band are renowned for their energetic and passionate live shows have become festival favourites around the UK, having performed at the Maverick Festival, as well as performing on Country to Country’s Saloon Stage, hosted by BBC Radio 2’s Bob Harris, Cambridge Folk Festival, and Boomtown’s District Wild West, to name a few. The band were also nominated for the Best UK Live Act Award by Spiral Earth, as well as receiving critical acclaim from Ian Dunlop himself.
The Goat Roper Rodeo Band are young guys with old souls, writing real people songs; Old Heart- ache sees them lamenting about hurt, lies, and self-doubt with no happy ending in sight – shot with a ‘Morricone’ cinematic backdrop of lonesome weeping lines by a man called ‘Horse’ back there on the Pedal-Steel. Then there’s the uplifting soul blues of Don’t Believe In You; feeling Bell-bottom broke and sipping from an empty basement glass, the blues keeps the tyres in the groove and the show on the road, trucking the day-dreams past skyscrapers and deep rivers of fixation, shooting dice and flipping tales in search of that next mile to salvation.