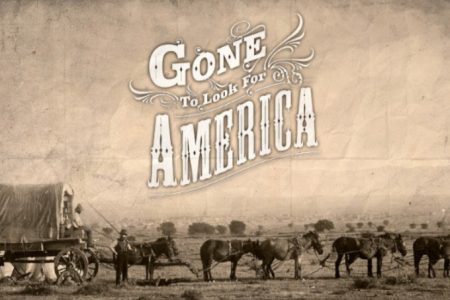 The heart of America, the spirit of a nation, is explored in two incredible collections of songs and a new book that has been created from the ‘Gone To Look For America’ adventure, by songwriter; author and psychologist Steve Bonham.
Inspired by a chance remark by singer-songwriter Joe Henry, appearing with Billy Bragg, Steve Bonham (ever the Vagabond Philosopher) sets off on literal and metaphorical exploration of the myth, music and the moonshine of America.
What he finds along the way inspires a witty, moving, idiosyncratic collection of songs, poems, prose and performance.
In these times, when many find America bewildering and disconcerting, the Gone To Look For America project is a timely reminder of the potency of the soul and spirit of this enigmatic land.

Wide-brimmed hat. Long dark coat. Guitar slung on back. 21 years on the road. A hundred thousand miles and half a thousand hotel rooms.
From the Berlin Wall to the Atlas Mountains, from the Sahara Desert to the streets of Hong Kong: a memory brewed in the long simmering soup of people and place.
A man who has learned to watch and to listen, to walk and talk in the ebb and flow of meeting and parting. He is a chronicler of the human spirit in words and music.
Steve Bonham is a storyteller, a published author, an inveterate traveler, for decades a songwriter and musician, and an award-winning psychologist.

The Book: A Beautiful Broken Dream

The ‘A Beautiful Broken Dream’ book is a ‘trail book’ of journal entries, poems and lyrics all tied together by a journey mostly on foot through the great forests of the southern states of the US and then a trip along music road, from Ashville to Nashville and New Orleans with his sometime travelling companion and great friend the artist Dinny Pocock.
Endeavouring to avoid irritable bears, rattlesnakes, agitated natives, over-exuberant creeks, and a whole variety of other challenges, they throw themselves into the heart of Appalachia and the Southern States and the music that flows from it.
What emerges is a wry, compassionate, idiosyncratic and highly personal view of this land and the ‘truth’ it holds for all of us.
Free download of chapter one available now; Book available to purchase at www.artisan-creative.com/gone-to-look-for-america.

The Music: The Girl With A Rattlesnake Heart and Reliance

Before, during and after the trek Steve worked on a collection of songs directly inspired by his experiences. These were recorded in the famous Woodworm Studios in Oxfordshire, England during Autumn / Winter 2017/2018. Some of the songs were co-written with fellow band members in The Long Road.
‘The Girl With The Rattlesnake Heart’ album takes a few simple ingredients and spirits them up into edgy, raw ‘moonshine’ music.
It’s Renegade Americana, songs like ‘The Girl with the Rattlesnake Heart, Last in Line and The One I Loved Before conjure up an America of brooding landscapes, the outlaw and the rebel, the lonesome battle against fate.
A land where the ghosts of the Cherokee wander along ‘The Trail of Tears’ and a motorbike roars into a desert sunset in The Ballad of the Dragon’s Tail. Songs of dark memories and courage – it’s acoustic music at full throttle.

Reliance keeps its feet close to the dirt music of the backwoods, a mix of self-composed and favorites of the band played with a jug of whisky at their side.
It’s music of the silver dollar and a fire under the stars. Dylan’s ‘The Girl from the Red River Shore’ meets the ‘Moroccan Song’ – a tale of a Californian girl hiding out in the Sahara Desert.
‘Emeline’ the riverboat chugs away from the troubles of the world and the vagabond leaves his bag behind the couch. And somewhere on a broken porch swing, the poet sits watching Hummingbirds and remembers the girl by the sea.
It’s a collection of songs where the surprising intimacy of banjo, cajon, guitar, tuba and sometimes piano rings true. And where, in the end, Diamond and the Gambling Man hit the long-lost trail.
On-line EP available on Apple Music / I-Tunes etc now. Whole collection available for download on website; CD available from Website.