Interview: Brad Paisley – An American Saturday Night (In The UK) 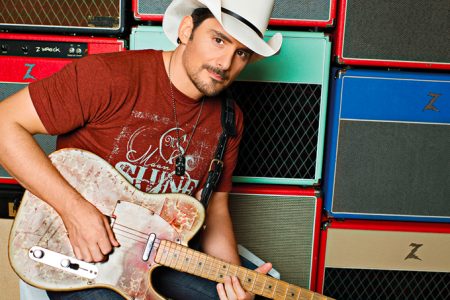 Brad Paisley reveals his love of all things British to Kieran Kennedy.
George Hamilton IV was popularly known as the International Ambassador for Country Music. But since Hamilton’s passing in 2014, that title could equally well be given to this year’s C2C headliner, Brad Paisley.
The clean-cut, Stetson-clad singer has always appealed to British fans, and particularly those who favour more traditional country sounds, thanks to songs like the unashamedly nostalgic Too Country, with its guest appearances from genre legends Buck Owens, Whisperin’ Bill Anderson and George Jones. The song was literally ‘too country’ to be considered for release as a single in America, but was embraced as an instant classic on this side of the pond.
Paisley, meanwhile, is happy to take on the responsibility of maintaining the reputation of country music – and indeed America – around the world. As he said when Keith Urban presented him with the CMA International Artist Achievement Award in 2015, “I think country music works as one of the best ambassador-type things you can do in an artform.
When you send other forms of music overseas, it’s obviously something people flip out over and love, but I don’t know if it reflects real life like our format does. Any time you see people in Sweden loving country songs and buying into what we are as artists, they’re seeing the real America. In that sense we have an obligation as a format to try and get this everywhere we can.”
Looking forward to this year’s C2C, Paisley says: “I’ve loved every time we’ve ever played over there. I think that when it comes to country music, the fans in the UK are in some ways more intense, because they’re sort of starved of it. We show up and we feel exotic to you, whereas in America, I’m the farthest thing from exotic!”
Brad last played C2C in 2014 and feels that the annual bash has made a big difference to perceptions of country among the wider British audience. “I know for a fact that the first time I did C2C there were a lot of people who were there more out of curiosity than a desire to hear country,” the singer says.
“And I think that now, a couple of years later, that’s changed and they know what to expect and they can’t wait.”
Early Relationship
Paisley has been coming to the UK since 1999, the year that he released his first album, Who Needs Pictures. As a new artist, he was part of a package headlined by another of this year’s bill-toppers, Reba McEntire.
“I had a great time, but it was a lot of work,” he remembers. “The touring wasn’t as cushy as it is now and we didn’t necessarily have it all mapped out right. There was a lot of jet lag and no time to acclimate, so it was rough. I had band members that I had to wake up to go on stage, because they were asleep in the dressing room!
“I remember telling my manager at the time, ‘I’d kinda like to become a star in America first, because that’s hard enough, and then after that, we’ll go back.’
“And that’s exactly what we did. Out of the blue, I really got the bug to go over again. I was heavily into British culture. I was watching The Office on TV, and Jools Holland and Top Gear. I loved everything about it and said, ‘I wanna go back!’
“I was told at the time, ‘There’s not much return on your investment, you’re gonna play small venues, but go because you’ll have a good time.’ So we went, and it went so much better than anyone expected. We started to really focus on the UK and we went every year for a little while. It was truly magical.”
It wasn’t just that Paisley had become an established artist, but that country music had become much more accessible in Britain, generally. “When I first went, there wasn’t YouTube or any way to find my music. When I went back, I realised that the world had really shrunk,” he says.
One of Paisley’s favourite things about his UK fans is that our tastes haven’t been shaped by country radio. We’re as likely to latch onto an album track as a particular favourite as opposed to a US hit single, simply because those singles never had blanket radio play over here. 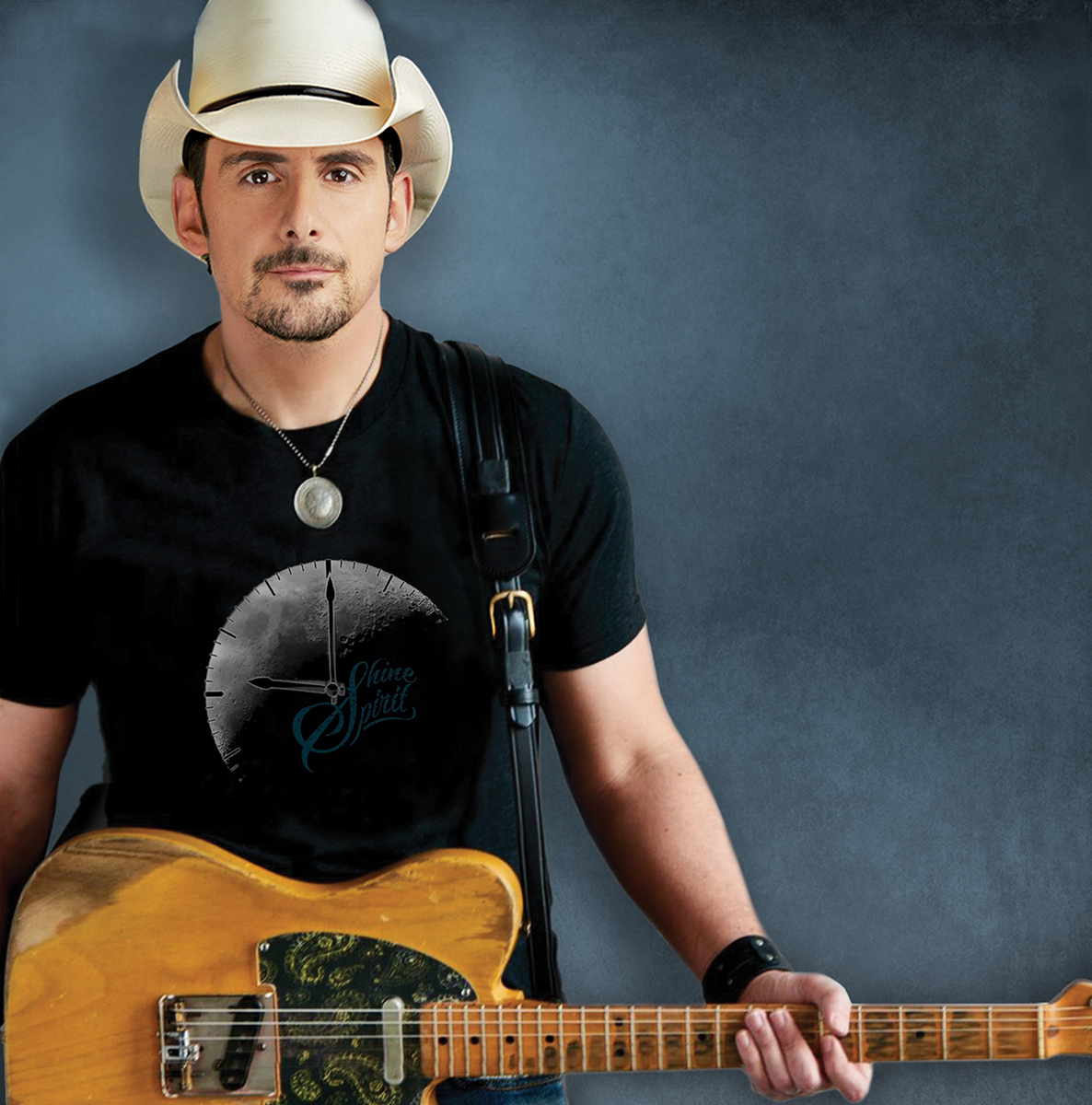 “I can get away with doing different songs when I go to London than I can do in the United States, where they want to hear No. 1 hits and not have too much new thrown at them,” he says. “I can dig in and do things that would be obscure to some of my American fans, because the European fans have studied them more and they know them.
“I remember the first time I played Shepherd’s Bush,” Paisley continues, enthusiastically. “I was testing the waters and I said, ‘Okay, I’m going to dig back and play something really old.’ I played Long Sermon, which was the first track on my first album. If I played that in America, there would be a really small proportion of the crowd that knows the words, and there would be a lot of fans who came along in the last decade that don’t. They might like it, but they wouldn’t know it.
“But here I was in Shepherd’s Bush with a couple of thousand people singing every word. I realised at that point that there was probably nothing I could do that would stump them.”
It’s particularly rewarding to Paisley when fans ‘get’ the words of his songs, because more than many artists he is very much a word man. His songs such as Celebrity, Alcohol and Online are full of humorous observations and funny lines in the tradition of Nashville lyricists Roger Miller, Tom T Hall and Shel Silverstein.
“I don’t know what it is about British culture and the British sense of humour, but it’s very conducive to the kind of humour that I throw into my songs,” says Brad. “There’s a subtlety that isn’t lost on your culture. And there’s no language barrier, which is great.
“My music also works in Norway and Sweden, because they speak very good English, and I’ve always wondered if it would work somewhere like Germany or France, where they’re less likely to be fluent in English. I know from going to Paris on vacation that it’s not a given that people there speak English.”
Not that the Brits and Americans speak entirely the same language, however. Our waistcoats are their vests, our aubergines are their eggplants and our fish-fingers are their fish-sticks. As for regional accents…
“London isn’t too bad, but there’s your version of what I would call hillbillies…” Brad lets out a typically sly chuckle. “Like you would have a hard time understanding the hillbilly types from my area, there’s accents outside London where I would probably need a translator!
“But I love the subtleties of the words you guys choose and the wealth of your language. I want to be able to talk like you, but I butcher your vernacular when I’m over there. I end up feeling like a bad impressionist.”
Staying Faithful
Some country artists such as the Zac Brown Band use the opportunity of being in Europe to play a wider range of music than they would in the US. The Zac Brown Band, for instance, wowed C2C with a Metallica cover. Paisley, by contrast, feels a responsibility to keep things country.
“I don’t want to try and do Eric Clapton music when you might have the opportunity to see him do it,” states the guitar ace. “I think people dress up in as much cowboy attire as they can find to come to C2C. They raid their closets for flannel shirts and cowboy boots and anything they might have that will make them feel like a country fan.
It’s an escape from their daily lives, and that’s what I want to give them: the feeling of what it’s like to have a night of country music.” In other words, no Metallica covers. “What I might do, though, is go back and grab something like a Johnny Cash song or a Buck Owens song that I think they’d like to hear.”
Paying Homage
It’s this appreciation for the festival that led to one of the most moving moments at Brad’s last C2C appearance, when at the end of This Is Country Music, he went down on one knee and took his hat off to the image of George Jones on the big screen behind him.
“I was really lucky to know George Jones, Buck Owens and Jimmy Dickens,” he sighs. “I became friends with these guys, and we’re losing them. So I feel a responsibility at any show now to have them represented in some way.”
Although he won’t be covering any Eric Clapton songs at C2C, Brad confesses to being “massively influenced” by British music.“Albert Lee is a great example,” he says of the lightning-fast British guitar player who came to fame in Emmylou Harris’ band. His influence can be clearly heard in the extended guitar break of one of Paisley’s first big hits, Me Neither.
“You guys have had some amazing guitar players,” Brad continues. “Eric Clapton was a huge blues influence on me. Jeff Beck. Then you’ve got bands like the Rolling Stones that are so responsible for the kind of music that we make now in Nashville. Their country leanings at times, with the Sticky Fingers record… that’s not far removed from what we do. 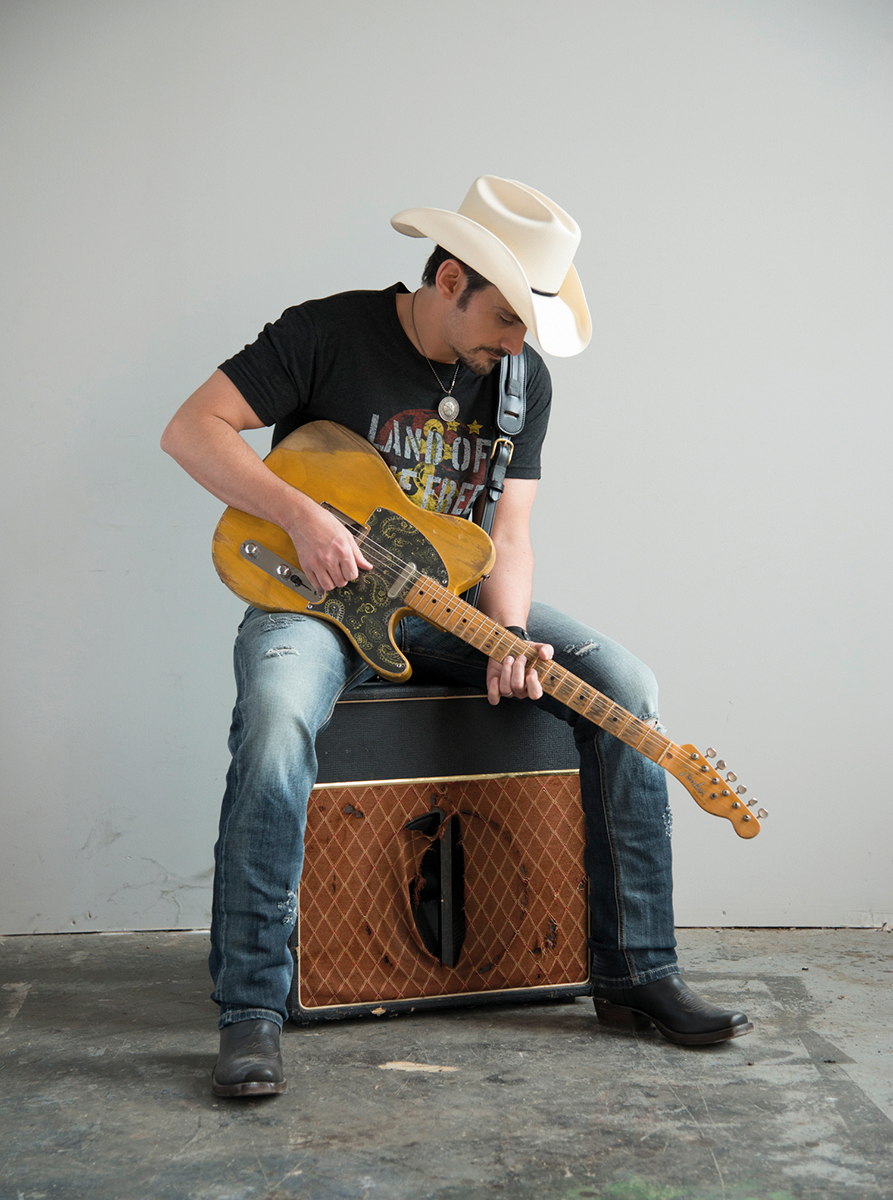 “I’m always discovering these bands like Snow Patrol and finding that they’re British,” he says, adding that The Beatles and Coldplay are among his favourite artists.
Naturally, Paisley’s love of our culture turns him into a total tourist when he comes over. “The last time we were there, we went to Abbey Road. You just have to,” he enthuses. “These things become a huge focus of your to-do list, just because a photograph was taken there. The same with the Royal Albert Hall. I’ve always wanted to go there because I was in high school when the live Clapton album, 24 Nights, came out – and that’s the age that music really hits you.”
Amazingly, the West Virginian even likes British weather. “I like the rain and the fog,” he laughs. “I imagine if you live there, you’d be tired of it. But if we’re only there for a week or two… the last time we were there we had a couple of days when it was sunny and bright and beautiful, and I was like, ‘That’s not what I want! This doesn’t look like The Office!’”
So, while most of us are hoping the sun will come out for our annual pilgrimage to C2C, rest assured that, in Brad Paisley, there’s at least one person there will be overjoyed if it’s bucketing down!