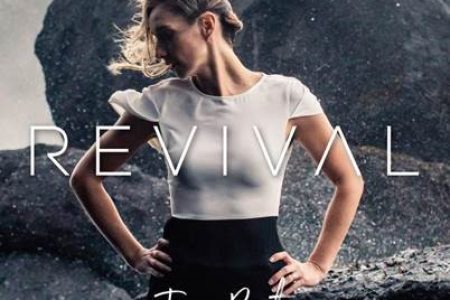 On May 4th, the critically acclaimed U.S. singer songwriter Jenn Bostic returns with her beautiful new album, Revival.
Written over the last two years, ‘Revival’ is the follow up to Jenn’s 2015 album Faithful, which included the BBC Radio 2 playlisted single, What Love Feels Like. Returning with the blend of blues, soul, country, pop and gospel that’s already won her an army of fans, Revival is her most authentic album yet. “It’s the album my heart has been longing to make,” says Nashville based Jenn. “I grew up listening to the bluesy, soulful sounds of Bonnie Raitt and have fallen in love with Tedeschi Trucks. When I went into House of Blues Studio in Nashville to record this album I knew exactly what I wanted for the first time in my career.”

And it shows. The result is an honest, soulful and empowering collection about overcoming any obstacle that life throws at you. Showcasing experienced song writing and confident vocals Revival is the sound of an accomplished artist making the music they want to make. “I’ve gone through a decade of artist development and I’m incredibly grateful for that time of growth and experimenting with different sounds, styles and producers,” says Jenn. “With Revival we had all the musicians in a large studio, at the same time, capturing a moment. It’s my favorite way to make music.”

Highlights include the bluesy opener, Wrong Thing about trusting your heart, and the powerful Haunting Me, about a flashback you don’t want to remember. The upbeat pop of Hollywood is one of the album’s brightest moments, whilst the contemplative ballad Lonely and the rock infused Follow Your Own Star showcase Jenn’s positivity.  “If I’m going to be putting a message out into the world I want it to be one of hope, love and positivity” says Jenn. “We see life through the lenses with which choose to look at it. I choose joy.”

Other standouts include the honesty of Faint of Heart, a personal favourite of Jenn’s. “It shares my story in the most vulnerable way. When you’re chasing a dream, doubt is inevitable, but if you believe you’re chasing your purpose, then it doesn’t matter how many times you circle the mountain, you have to keep circling.”  There’s also the soulful country vibes of Love Song and the empowering Before It Gets Better. The life affirming Gotta Be You is an anthem for anyone that feels different and don’t miss the album’s lead single Revival, an uplifting gospel song about the power of positive thinking.

Recorded at House of Blues Studios in Nashville, Tennessee, and produced by six-time Grammy award winner, Paul Salveson, Revival is Jenn’s 4th studio album.  It follows an impressive career, which has included an appearance on BBC Breakfast in 2012, performing her breakthrough single Jealous of the Angels. Written for her late father, the song was championed by both Smooth Radio and BBC Radio 2 and hit Number 1 on the singer songwriter chart, with now over 3 million views on YouTube.
In 2015 she was invited to perform on Songs of Praise, singing her track Little Grace from her album Faithful. She was the First American Independent Artist to have their first three singles playlisted at BBC Radio 2. In 2012 she was the recipient of five Independent Country Music Association Awards including “Best Songwriter,” “Best Female Artist” and “Overall Winner.” She had the honor of performing on Weekend Wogan for the late Sir Terry as part of a special St. Patrick’s Day show, as well as Good Morning Sunday.
In September 2017, Jenn returned to the Radio 2 Playlist with her single What Love Feels Like and in October Jenn was named “International Touring Artist of the Year” at the British Country Music Association Awards.
Jenn has performed sold out tours across the United States and Europe, and has opened for the likes of Richard Marx, Christian Kane and The Band Perry. Venues have included The Grand Ole Opry, The Ryman Auditorium and Jazz at Lincoln Center in New York City. Her new UK tour kicks off on 21st February and sees her performing across the country, and includes her biggest ever UK headline show, at London’s prestigious Bush Hall on May 1st.