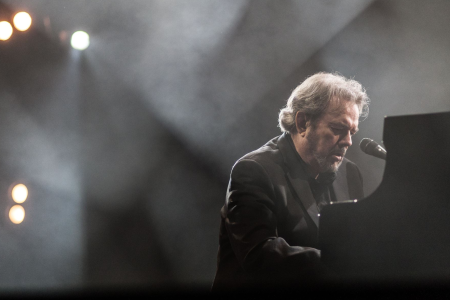 Before the show began, a fellow audience member remarked that he didn’t think a Jimmy Webb show would attract many young people like myself, and though my presence probably did lower the average age of the crowd, Webb put on a performance that every music fan would enjoy and any musician could learn from.

The night began with Ashley Campbell and Thor Jensen. I know Ashley’s music well and have always enjoyed her performances but Thor was a new artist to me and the pair have just begun performing as a duo. Tentatively, they performed a selection of covers and each others past solo work, their voices gelled well together and they built up a relaxed rapport with the audience. I must add the audience was the politest crowd I’ve ever had the pleasure of being a part of. Having loved Ashley’s music and her dad’s before her, I am keen to see what she can do as part of this duo. Speaking with the pair after, it seems they have big plans for records and subsequent tours (which include the UK) and with their individual talents uniting as one, I think they will go a long way!

Sat at his grand piano, Webb had a relaxed demeanor as he opened his set with ‘The Highwayman’. Upon it’s conclusion, he turned to face the audience slightly. What ensued was two hours of Jimmy Webb telling us the stories behind some of his biggest hits, he went off on more than a few tangents as his tales were punctuated by the songs.

He played ‘Galveston’ the way he had written it and compared it to the way Glen Campbell had interpreted it, laughing and joking as he retold the story. There were political moments too and the crowd appreciated his honesty and values.

He spoke of his childhood too and how he learnt to arrange before performing an arrangement of Billy Joel’s ‘Lullabye (Goodnight, My Angel)’. He also gave an insight into the music industry as he told of his dismay that Kanye West had used ‘Do What You Gotta Do’ in his song ‘Famous’ without asking for Webb’s permission.

Concluding with ‘Wichita Lineman’ followed by ‘MacArthur Park’, Jimmy Webb put on a truly magical evening which featured hit after hit and some of the funniest stories of how his life and career panned out. For any music fan, particularly those keen to make music, no matter what age or what genre, that show was a real masterclass!