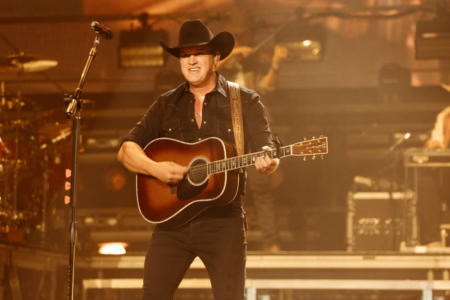 Capitol Records Nashville multi-Platinum hitmaker Jon Pardi wrapped his headlining AIN’T ALWAYS THE COWBOY TOUR on Saturday (10/1) with a sold-out show at Nashville’s Ascend Amphitheater. The CMA and ACM award-winning singer/songwriter/producer took the stage to a capacity crowd in Music City to perform his fan-favorite hits plus new music from his red-hot new release, Mr. Saturday Night, after selling out over a dozen more dates on the nationwide run that included Los Angeles, New York, Boston, a bucket-list hometown show at Sacramento, CA’s Golden 1 Center and more. View photos from the final night of Pardi’s AIN’T ALWAYS THE COWBOY TOUR here.

Moments before the wall-to-wall Nashville show kicked off, Pardi was surprised with the news of his third studio album, Heartache Medication, officially earning GOLD certification by the RIAA. Pardi was presented a GOLD plaque commemorating sales of 500,000 units by UMG Nashville Chairman & CEO, Mike Dungan. The critically acclaimed project was nominated for Album of the Year by both the CMA and ACM, and named one of the best albums (all-genre) of 2019 by the Los Angeles Times and Rolling Stone.

Pardi is currently a double nominee at the upcoming 56th Annual CMA Awards, on the ballot for Musical Event of the Year and Music Video of the Year for his sweeping collaboration with Midland, “Longneck Way To Go,” featured on Mr. Saturday Night.