Keith Urban brings the house down in Manchester! 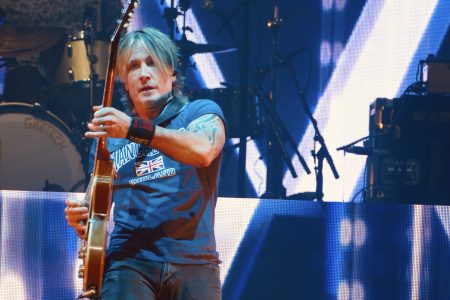 Keith Urban showed everyone why he’s been crowned Entertainer of the Year so many times as he put on a show at Manchester’s O2 Apollo. Since I’ve been going to gigs, I cannot remember seeing a show quite like that; the guitar skills, the energy, the humour – the night had everything!

He opened proceedings with ‘Days Go By’ and it was immediately clear that it was going to be an energetic night and the crowd was loud as they sang their hearts out from the get-go.

Three songs in and Keith addressed the crowd, he was reading the signs his fans had made for him and chatting with those he could. Summer, who was attending her first gig with her mum and dad was asked to join him on stage. As they took photos together, Keith joking told the crowd to chat amongst themselves, “I’ll give you a topic” he said, “Do penguins have knees?” Throughout, he had a strong rapport with the sell-out crowd. Later on he would involve them again to sing their guilty pleasure song, ‘In The Jungle’.

Keith warned of a long night as he took us on a journey, playing hit after hit from different points in his career, from ‘Never Coming Down’ and ‘Parallel Line’ from ‘Graffiti U’ to ‘Ripcords’ ‘John Cougar, John Deer, John 3:16’ the crowd, even those still seated were dancing along. Keith’s vocals never faltered as he danced along with them.

During ‘God Whispered Your Name’ Keith showed off his impressive guitar skills as he took time for a solo and to improvise. He also introduced some of the band at this point though the rest would be introduced towards the end of the night when Jerry Flowers and Nathan Barlow showcased both their playing abilities and their singing which was outstanding.

The special effects and lighting added to the spectacle, particularly the scene where it looked like a girl behind a shower screen or curtain, it was 3D and very realistic. It was instrumental in the delivery of the duets, ‘One Too Many’ and ‘The Fighter’ as the screens projected P!nk and Carrie Underwood up there whilst the crowd imitated them, with big smiles upon their faces.

There were a couple of special and unique moments that occurred in the show, firstly was the introduction of a group of buskers that Keith and his drummer had watched just the day before in the centre of Manchester. The Reggae outfit, named Rough Trade, were delighted to have been given the opportunity and on their second song, a cover of ‘Red, Red Wine’ Keith sang along with them.

Later in the show, Keith played acoustically, just by himself and an acoustic guitar. They had had to adapt their usual set-up for the venue but it didn’t phase Keith as he still executed it perfectly. He began by paying tribute to Naomi Judd and singing ‘Love Can Build A Bridge’. He ended this short segment by going back in time to 2002 and ‘You’ll Think Of Me’.

He ended the show with the upbeat, party anthem ‘Wasted Time’ with confetti cannons firing but the fans didn’t want him to go just yet. So, after briefly exiting the stage he returned for a couple more including a stripped down version of another early hit, ‘Stupid Boy’.

From start to finish, Keith Urban brought a party to Manchester. Keith along with his whole band showed some of the greatest level of musicianship that I’ve ever seen, his connection with the audience was unrivalled and his vocals were on point. Moreover, it was a set full of the highest quality tunes you’ve heard this century and there were moments that made you laugh, moments that made you cry and moments that saw you up on your feet dancing along. It’s one of the best gigs I’ve ever been to!