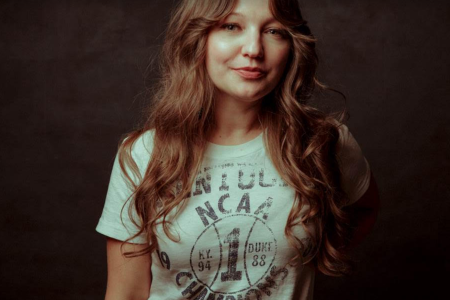 In support of her home state, Kelsey Waldon has launched an auction in partnership with Gibson Gives and RallyUp to raise funds for those affected by the devastating floods in Eastern Kentucky earlier this summer. The auction will include three guitars wrapped in Waldon-specific art, produced and donated by Gibson. Waldon will also partner with Gibson to support Appalshop.org, a Kentucky-based non-profit organisation that provides free music lessons to school-aged children. Additional details to be announced.

In conjunction with the auction, the official music video for Waldon’s song, “Backwater Blues,” directed by Curtis Wayne Millard and dedicated to the resilience of Kentuckians, is debuting today. Watch/share HERE.

Reflecting on “Backwater Blues,” Waldon shares, “I wrote this song from personal experience, and something I lived every season of my life growing up. It was inevitable that one day I would write a song about the backwater. To everyone I know down in the Ohio River bottoms, people will ask them why they still live there in flood country? The answer is because it is home. Just like when people outside of the state ask, ‘why do they still live in hollers by the river and creeks?’ It is home and most people simply can’t move. They don’t have the means or money to do it, and the reasons why are mostly out of their control. The message is one of empathy and the storyline is one of heartbreak, except this time Mother Nature is doing the breaking, over and over again. She is upset for good reason, but the character in the story has a simple plea. I think most anyone, outside of the state and all around this world, can relate…especially in these times we are living in. Pitch in if you can, to give back to a place that has given us so much.”

“Backwater Blues” is from Waldon’s acclaimed new album, No Regular Dog, which was released last month via Oh Boy Records. Produced by Shooter Jennings (Brandi Carlile, Tanya Tucker) and recorded at Los Angeles’ Dave’s Room Studio, No Regular Dog is rooted in deep self-reflection and features Waldon’s most personal songwriting to date. With these eleven songs, including “Season’s Ending,” a tribute to Waldon’s mentor John Prine, Waldon solidifies her position as one of music’s most authentic voices—turning the harsh truths of loss, self-doubt and sacrifice into songs that soothe and brighten the soul.