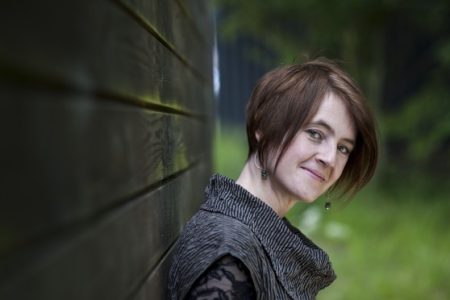 Somewhat unknown in these parts, Kim Edgar was embarking on her first solo UK tour but despite admission prices being slashed, only a handful of diehards turned out on a bitterly cold evening. Those that made the effort were rewarded with some of the most beautiful music heard at the Centre Stage for a considerable time. Almost a household name in her native Edinburgh, Kim is well known as an integral member of Scottish/Canadian outfit The Burns Unit and her imaginative and beautifully crafted songwriting has been inspired largely by band member Karine Polwart.

With two critically acclaimed albums under her belt and her live performances drawing rave reviews, Kim’s music is starting to reach a wider audience and she delivered two faultless sets featuring, in the main, material from both her latest album THE ORNATE LIE and the 2008 offering BUTTERFLIES AND BROKEN GLASS. A stunning first set opened with a lovely ballad House On The Hill, Red, about her parent’s house in Bathgate and Cinderella’s Slipper which Kim wrote after seeing a discarded shoe in the street. Another gorgeous ballad Hands Held and The Steamy Note (written on the bathroom mirror, of course) were followed by the title track from THE ORNATE LIE before it was sing-along time with 1,2,3,4,5. Fragile, the story of a young baby and Scissors, Paper, Stone,” a tale of domestic abuse, took us into the break.

The second set brought much of the same; Not For Sharing, A Favour From The Sea and A Poppy Blossoms, another lovely song inspired by Kim’s dedicated charity work with deprived children, were all delivered impeccably. After Heavy Skies it was time for more audience participation with 8,9,10 (or 8 September 2010, her nephew’s birthday) but not before she’d slipped in a catchy number about her best fitting boots, which were wearing out! Sadly, the old enemy had caught up and it was time for the last number, a murder ballad Blood, Ice & Ashes” before Kim returned to encore with Old Hotels about some of the dreadful accommodation she’s housed in after gigs; but not in Bournemouth, she hastened to add.

Kim’s music is difficult to categorise as it seems to veer between folk, pop and contemporary. Her vocal delivery however, was outstanding and her musicianship on both piano and guitar exemplary. The Bournemouth Folk Club prides itself on its sound quality and this was enhanced by Kim’s gorgeous voice where every word came over as clear as crystal. Local singer-songwriter Krista Green set the mood for the evening with a short set, the highlights being Silly Me and a pleasant ballad Never Let You Down.