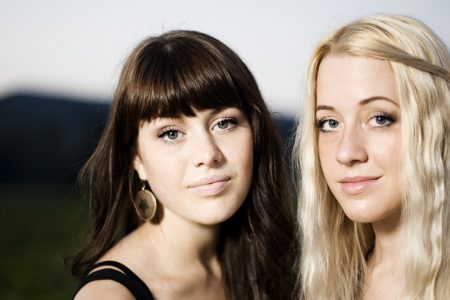 Calhoun, Georgia-born Larkin Poe – sisters Megan and Rebecca Lovell (formally members of the folk trio, the Lovell Sisters) – dropped by the bustling Sheffield Greystones Inn, the 24th of 30 European tour dates scheduled in support of their recently released fifth EP, the CD/DVD combo THICK AS THIEVES, to deliver an enchanting 14-song set to an appreciative, sold out audience.

The toe-tapping Chesterfield foursome, Grassoline provided the opening sequence. Joined on the intimate stage by band guitarist Rick Lollar, drummer Chad Melton and bassist Robby Handley, the five-piece Larkin Poe opened their set with the deliciously rocky Jailbreak, followed by the soulful mid-temp number, The Principle Of Silver Lining, Rebecca vocally superb on both whilst Megan’s harmonies and lap steel solos were an utter dream to witness.

Throughout the evening, the sisters managed to uphold a tasteful balance of well-interpreted covers, old favourites and new gems, including the Megan-penned Trance, bluegrass-rooted Long Hard Fall, the rock-vibed Love Or Money and Play On (taken from the new EP) and a fleeting, improvised rendition of Gillian Welch’s The Devil Had A Hold On Me. ‘It’s not one of ours but we like it a whole lot…’ Rebecca said with a twinkle in her eye, just as they broke into the mandolin-led cover of Massive Attack’s Teardrop; the Southern rock undercurrent, beautiful plucked backdrop and stunningly delivered 4-piece harmonies complementing each other wonderfully, whilst their rendition of the widely-covered Wade In The Water, laced with Larkin Poe flourishes-not only demonstrated the sisters’ musical maturity, but also provided the evening with a set-list gem.

“We’re going to take you back to the beginning of Larkin Poe,” Rebecca continued after the applause from the previous song had died down-the folk purity and musical chemistry woven into the familiar chords of We Intertwine, filtering beautifully through the speakers. Suspecting as though she was being unusually quiet, Rebecca explained how the pair had given three interviews already that evening: “When you’ve been talking all day, there isn’t much left to say by the evening…” However, I doubt the audience minded, as she went on to tell the sea of fascinated faces about how the mandolin and lap steel-led Mad As A Hatter was written about her schizophrenic grandfather who led multiple lives around the world; its intense vocal deliverance against a dark and anxious undercurrent, providing a vocal high.

The five-some were whooped and applauded back onto the stage to provide an encore of the wholly infectious Money (That’s What I Want), the stunning harmonies and three-part solo allowing them to finish on a crowd-cheering, audience-applauding high, heading to the bar area afterwards to sign CDs.

An utter joy from start to finish, the Lovell girls not only demonstrated what talented musicians and songwriters they are but also how easily they can captivate their audience in the most delightful way.