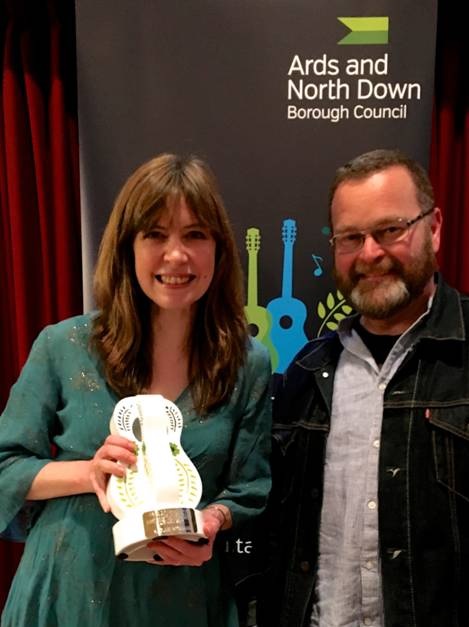 “I’d just finished my set and left the stage, and the crowd was calling for an encore, but before I could come back out from the wings, Ralph McLean and Ernie McMillen walked onstage and started talking about the Lifetime Achievement Award.

I just thought, ‘Oh, rats, now they’ll bring out some big-name guitarist to accept this bloody award and I won’t get to do my encore!’ Never in a million years did I think it would go to me. I was totally and completely floored. It’s a very, very big deal to be placed on a level with so many of my musical heroes.”

And she did get to do an encore after all, performing a cover of Ewan MacColl’s ‘The First Time Ever I Saw Your Face’, which she also recorded on her fourth solo album Walking Into White (Waterbug, 2015).

“Every year since 1999, Ards International Guitar Festival has awarded a Lifetime Achievement Award to an artist performing at the Festival,” explains the Ards Arts Centre’s Emily Crawford, co-director of the festival along with Ernie McMillen and Darren Porter. “There has never been a female recipient of the award, and with an artist of the calibre of Sarah McQuaid on our bill, it was an easy decision to make in 2017! The Newtownard’s Guitar Festival features guitar styles from classical to blues, folk to jazz and bluegrass to rock.

“A favourite of local audiences in Ards, Sarah has a true gift and captivates the audience with seamless playing and an effortlessly enchanting voice,” Crawford continues. “She and her guitar become one beautiful sound, and her goosebump-inducing rendition of ‘The First Time Ever I Saw Your Face’ was the perfect end to an outstanding performance.”

Ernie McMillen agrees: “It is rare in the guitar world to find a player who displays genius without arrogance, and who shares their hard-won skill and knowledge so selflessly,” he says. “I get to see many specialist guitarists up close, and many over-perform. It’s honey for the soul to witness Sarah McQuaid perform.”

Sarah McQuaid is currently hard at work writing songs for her fifth solo album, to be produced by folk icon Michael Chapman and released in 2018 (once again on the US-based Waterbug label) with album launch tours in the UK, Ireland, Continental Europe and the USA.

She also hopes to pen a sequel to The Irish DADGAD Guitar Book, the popular tutor she authored on the alternative guitar tuning she uses exclusively – originally published in 1995 and still the standard reference on the subject, selling worldwide through Novello & Co. /The Music Sales Group and Hal Leonard Corp.