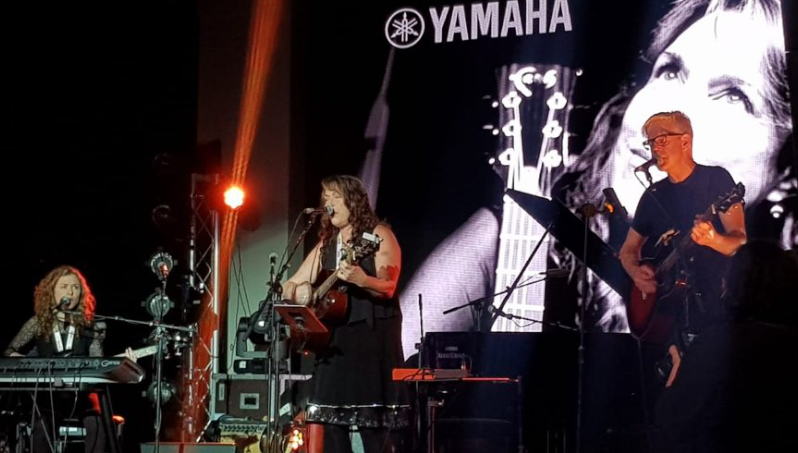 Those who love country music will almost certainly be aware of Beth Nielsen Chapman’s talents, and the artist delivered an exceptional performance at the Festival of Sound in London.

After being introduced by the iconic presenter Whispering Bob Harris, Chapman – taking to the stage with solo artist Ruth Trimble and Gregor Philp from Deacon Blue – opened up with Enough for Me from her latest album, ‘Hearts of Glass’ and laid down a marker as to how the next hour would go with a stellar showing.

Chapman was very engaging with her audience, and in-between songs went out of her way to give the crowd an anecdote or a story that was relevant to the song she was getting ready to play, or her life.

One such story was about her song Nothing I Can Do About it Now with Willie Nelson, which she said he loved the album it featured on so much, that before it was released, he was going round a golf course on a buggy with a ghetto blaster playing it out.

As with most of her tracks, there is huge emotional pull towards them, and before she put in a blistering display of Epitaph of Love, Chapman explained that the song took her 18 years to write, and came to her after a notable argument with her husband.

Sticking with the theme of partners, All I Have was next, and Chapman introduced the song by saying “This is played at a lot of weddings, and has a very low divorce rate! Thank you to the lovely Bob Harris and Radio 2.”

There was a very powerful rendition of Sand and Water, which Chapman revealed was written a month after her first husband died, and was one of the standout moments of the set.

Closing on This Kiss, Chapman performed that song as she had performed her set – brilliantly and with lots of energy, leaving the audience walking away knowing they had been treated that evening.