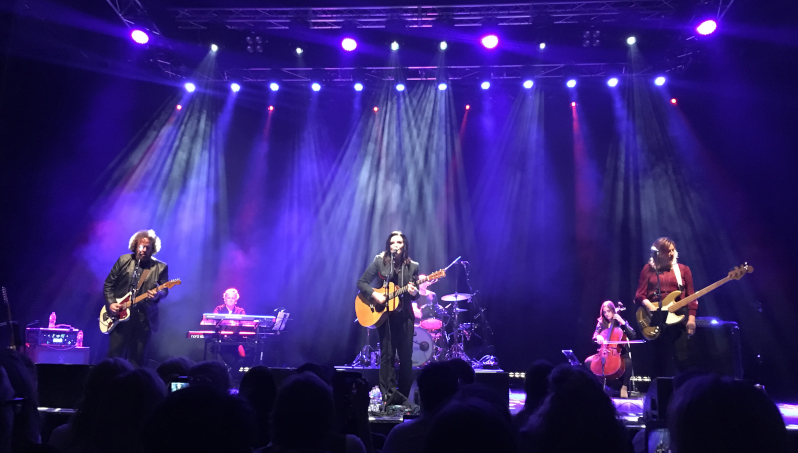 It’s been a while since Brandy Clark released new music, but that didn’t stop her packing out the Shepherd’s Bush Empire on her return to the UK. Suiting Clark’s storytelling nature, the venue was fully seated — the first time I’ve seen the Shepherd’s Bush ground floor decked out with seats rather than standing room. This set the tone for the evening; a brilliantly fun, but sedentary affair.
Support came in the form of Kyle Daniel, an American, Chris Stapleton-esque musician who performed alongside his guitarist and backing-vocalist, Seth Rentfrow. Standout songs from his set wereSomewhere In Between and Landline.
Brandy started her set with Girl Next Door, a popular track off her 2016 album, ‘Big Day In A Small Town’. This was followed by a number of other well-known tracks, forming the first segment of the show. Clark’s set can be easily broken down into four clear segments. This first part included crowd favourites such as Love Can Go To Hell, Get High and You’re Drunk. Get High got a particularly warm reaction from the London crowd, with cheers before she even started singing.
The next segment of the show saw Clark introducing fresh, new music from her upcoming album, which will be dropping early next year. The first track she played off this new record was Love Is Fire, followed by what may well be called At The Bottom Of The Ocean, though the actual track name may be different. The latter was typical of Clark’s wit and made me very excited for the rest of the album.
It was at this point in the night that Clark’s band left the stage, leaving her to perform a few acoustic numbers, including the brilliant Bigger Boat. She introduced this track, also a new one, describing how it was originally inspired by her favourite film, Jaws. The song, however, addresses the state of today’s political climate in a refreshing and clever way. The song serves as another reminder of Clark’s incredible talents as a witty and relatable songwriter.
The third section of the show was described by Clark as the ‘songs she wishes she’d written’ segment. She kicked this off with a cover of George Strait’s The Chair. This was followed by Carole King’s Will You Love Me Tomorrow? and Linda Ronstadt’s Blue Bayou.
The fourth and final section of the show made a return to Clark’s well-known and well-loved tracks. Daughter, her “kinder, sweeter, longer-lasting sort of revenge” song, got the expected cheers from the audience. Hold My Hand came next, with its heartfelt story, followed by perhaps Clark’s most popular single, Stripes. With the whole crowd singing along, this was a perfect choice of final song, or at least the last before the encore.
Clark came back on to perform one last number: Three Kids No Husband– a quieter choice for an encore, but clearly a popular song among the audience. This was an intimate and enjoyable show, filled with Clark’s wit and storytelling. Now we just have to wait for the New Year to hear the new album – I’m sure it’ll be worth the wait!
Danielle Smith