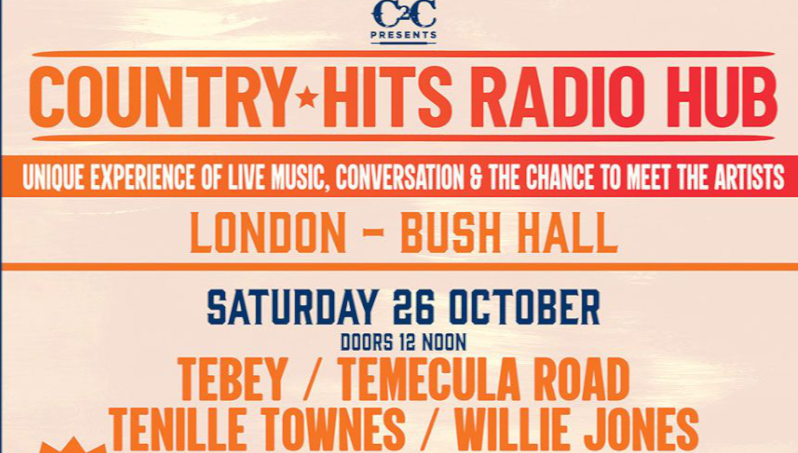 The Country Hits Radio Hub daytime shows really caught the eye for Country Music Week 2019, with a number of top artists showcasing their abilities.
The Saturday hub – hosted by Baylen Leonard – had Temecula Road, Willie Jones, Tebey and Tenille Townes on the bill, with each playing a 25-30 minute set before Leonard would ask them questions from the audience.
First up was Temecula Road, who were enjoying their first trip back to the UK in a good few years and the trio soon set about making their presence felt. Their cover of Desperado by Eagles went down a storm and the harmonies fused with the lovely chords at their disposal were lapped up by the audience, with many rushing to meet the talented trio after their set at the meet and greet.
It was then time for Willie Jones, who just about everyone is talking about at present. Everyone stood up immediately for his set as they knew it would be a riot and while the debate will forever go on as to whether Jones is country (we’re not entirely sure throwing in an acoustic guitar gives you a pass at country music, but hey ho), there is no doubt that a Willie Jones set is some of the most fun you will ever have at a gig.
What was so refreshing to see is that even though there would’ve been a number of purists in the crowd, everyone to a person – young and old – were on their feet and dancing away to Jones’ set. Ultimately, when a crowd is reacting like that, who cares about strict genre rules?
Tebey was next – starting the Canadian invasion on the stage in the process – and credit must go to the former Wimbledon resident for really trying to make a connection with his audience, with Tebey regularly trying to engage and speak to those in attendance. This was appreciated by those in the crowd and his songs were greeted in a warm fashion, while his cover of Avicii’s Wake Me Up was joined in by many.
After the gig, Leonard told the crowd that Tebey was actually at C2C 2019, which may surprise those who were there given that he wasn’t on the bill, but his reasons for coming were purely to find out more about how to get on the ladder and play gigs in the UK, which is hugely commendable.
Finally, it was Tenille Townes‘ turn, with the Canadian closing the set and in doing so, putting on one of the best country gigs of 2019. Straight from the get-go, the pint sized artist had the audience in the palm of her hand, with her staggering musical ability moving some to tears during Jersey on the Wall and Somebody’s Daughter, bringing people to dance during her cover of Keith Urban’s Love Somebody and getting people to sing along loudly during White Horse.
It was just Townes and a guitar, yet she had so much impact on the crowd to the point the whole room gave her a very lengthy standing ovation at the end – visibly moving Townes to the point she was in tears.
The Country Hits Radio Hub was certainly one to remember and fingers crossed all of the artists on the Saturday, of course in addition to Townes, will be on the bill in some capacity at C2C.