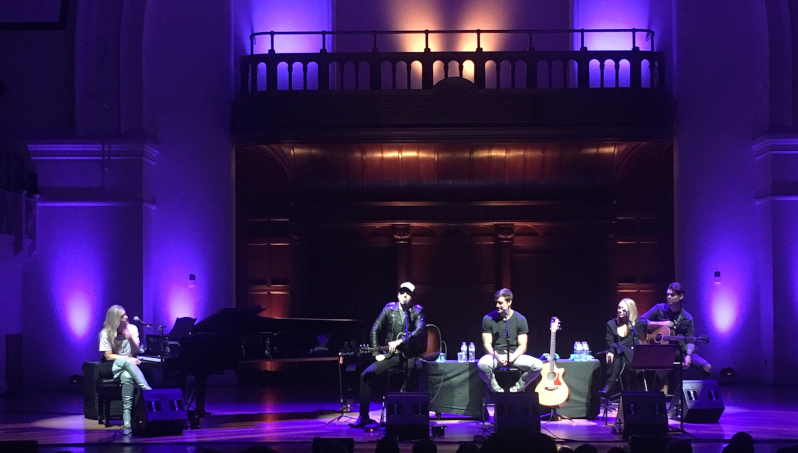 The starting gun for C2C 2020 at which the line-up was announced and a sell-out show that was effectively a sampler, songwriter circle-style, of what modern Nashville offers.

Wammack kicked things off, curiously, with Closure, from her debut album ‘Enough’ and from then on, it’s a mix of styles, hits and favourites – not least Denning’s playful tune about driving licence theft, David Ashley Parker From Powder Springs, Bradbery’s soaring Sway and What Are We Doing (written with Thomas Rhett), Hayes’ family opus Leila’s Stars…

What’s always baffling with these things is the amount of time the artists simply spend watching ach other. Wammack sang five songs at her piano, played on one other and spent the rest of the two-hour show with hands clasped around her thigh-high green Aquaman boots. Given that this was part of a tour, not a one-off show, one would think (and hope) they’d be in and out of each other’s music hoping to hit upon a Crosby, Stills, Nashville and Young-style supergroup.

Still, it’s chatty and it’s fun with perhaps Denning being top scorer if it had been a TV reality show itself, particularly with his off-kilter view on relationships, Abby (Any Body But You), rocking and rolling on his bar stool – and even with an electronic bass drum pedal, so unlike the country singers of old.

Bradbery finishes things off with her hit Worth It and with a wave they’re gone. Encore? No siree…