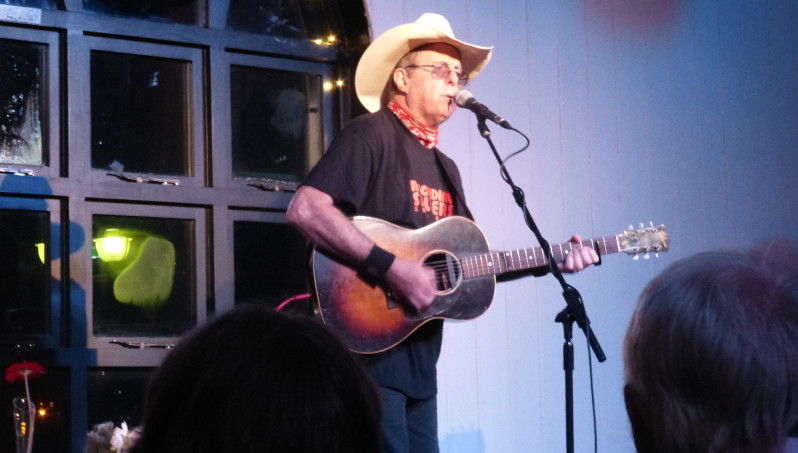 A stalwart of the Americana scene with 35 albums to his name, singer/songwriter, author, painter and troubadour Tom Russell has a hard core of devoted UK fans who are prepared to travel the length and breadth of the country for an evening of anecdotes and great music.

A sell-out in the tiny 90 seat Norwegian Church Arts Centre was therefore guaranteed, although surprisingly, there were a few no-shows. Bouncing onto the stage displaying his usual brash persona, Russell pretended to be the opening act.

Nobody was fooled as he launched into a medley of snatches from some of his favourite artists; Ian & Sylvia’s More Often Than Not, Townes’ Pancho and Lefty, Warren Zevon’s Carmelita, Guy Clark’s LA Freeway and Willie Nelson’s Whisky River.

With his new five star album ‘October in the Railroad Earth’ prominent on the merchandise counter, things were off to a rip-roaring start with the Johnny Cash classic Wreck of the Old 97, the only cover on the album.

With such an enormous back catalogue, Russell at times seemed unsure what to play next, often responding to requests although his promise to play Small Engine Repair never materialised. Hair Trigger Heart and Guadalupe satisfied the purists but not before we’d been treated to his Dylan Thomas medley with a couple from ‘Folk Hotel’.

Eager to promote the new album, the Tex-Mex flavoured tale of Monterey cowboy Isadore Gonzales, his GPS love song Back Streets of Love and of course the title track, highlighting author Jack Kerouac’s time working as a Railroad brakeman, convinced many punters to pay a visit to the merch counter in the interval. The raucous Tonight We Ride closed the first set.

Much dog howling accompanied The Light Beyond the Coyote Fence before Russell displayed his lighter side with Finding You, written for Swiss wife Nadine who inspired When the Road Gets Rough, recounting some pretty horrendous journeys when touring the UK.

With five numbers from the new album covered, it was back catalogue all the way to the inevitable finale Who’s Gonna’ Build Your Wall? handed a new lease of life given the recent antics in the US.

The usual somewhat contrived encore brought three more from the past; Stealing Electricity, Nina Simone and Navaho Rug, were all enthusiastically received by the audience who responded with a fully deserved standing ovation.

Tonight, we had just Russell and his guitar so some of the ‘twang’ prevalent particularly on ‘October in the Railroad Earth’ could not be replicated, but nevertheless, this was a great evening of folk, country, Tex-Mex and country rock and few in the audience would have left without owning the new album.

One enthusiastic devotee even eagerly parted with £100 for a piece of damaged Tom Russell artwork. Devotion indeed!

Medley: More Often Than Not/Pancho and Lefty/Carmelita/LA Freeway/Whisky River
Wreck of the Old 97
Medley: Up in the Old Hotel/The Sparrow of Swansea
Hair Trigger Heart
Guadalupe
Isadore Gonzalez
Back Streets of Love
October in the Railroad Earth
Tonight We Ride
The Light Beyond the Coyote Fence
When the Road Gets Rough
Finding You
East of Woodstock, West of Vietnam
St. Olav’s Gate
Blue Wing
Who’s Gonna’ Build Your Wall?
—————————————————————–
Stealing Electricity
Nina Simone
Navaho Rug