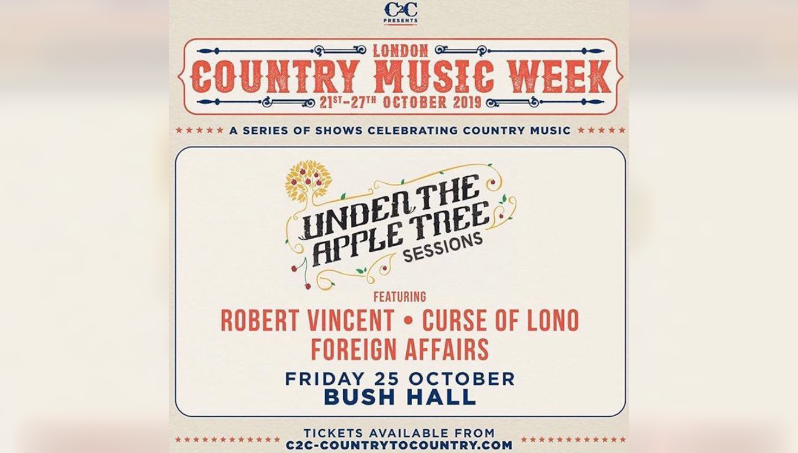 The growth of the Under the Apple Tree sessions has been nothing short of remarkable since they were started by ‘Whispering’ Bob Harris, with a huge platform being offered to a vast number of artists looking to make their way up the ladder.

At Bush Hall, the night was dedicated to progress that has been made, with Harris taking up his role as compere to highlight just how Under the Apple Tree has grown and helped certain artists – and all the artists on the night were linked to Harris and the sessions in their own way.

Foreign Affairs kicked things off, with the two-piece from Bristol sounding absolutely massive in Bush Hall – their electric guitars in particular almost bringing the building down as the two rattled through their back catalogue in emphatic fashion.

It’s amazing to think that it’s just the two brothers in the band, with the two harnessing a phenomenal amount of talent to the point that if you closed your eyes and looked away, you’d think there were at least four on stage.

Their songs struck a chord with many in the audience and as their set came to a close, to mass applause, Harris returned to the stage to announce that Under the Apple Tree have signed a publishing deal with peermusic UK and that Foreign Affairs have become the first band to be signed as a result of that agreement, marking great news all round.

It was then time for Harris’ most recent UK Americana Emerging Artist Award winners in Curse of Lono to take to the stage, with their cinematic and expansive sound reverberating around the walls of Bush Hall.

The band also had a surprise up their sleeve for the London audience on what frontman Felix Bechtolsheimer described as what “may or may not be” the group’s last gig of 2019, as Alabama 3 member Nick Reynolds joined the group to play harmonica and add backing vocals to a few songs.

Closing their set on Valentine, the Americana five-piece also left to a very positive reception and Harris once again returned to the stage to introduce the final act of the night in Robert Vincent.

Explaining how he came across Vincent as part of a ‘Bluebird Cafe swaps with Bluecoat’ scheme in Liverpool, where many singer-songwriters came to showcase their talents, Harris said that he was completely blown away by Vincent and was amazed that he hadn’t heard his musicianship before, eventually making Vincent the inaugural UK Americana Emerging Artist Award winner.

After Vincent took to the stage, it was very clear to see what Harris saw in him as him and his band put on a show that simply wowed everyone in attendance, playing a mixture of old songs and new.

The Liverpool artist was on top form and even when he was in danger of overrunning his set due to time constraints, absolutely no-one was complaining such was the quality of the performance and the songs he was playing.

A thoroughly enjoyable evening and we’ll look forward to seeing how Under the Apple Tree moves forward in a number of ways with peermusic.