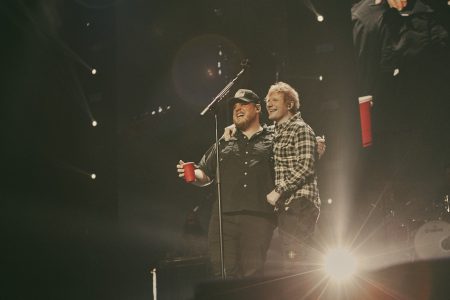 Luke Combs closed out C2C with a bang as he performed one of the most energetic headline sets that I’ve ever seen at C2C and there was a surprise in store as he welcomed Ed Sheeran to the stage for a special duet!

The day got off to the very best of starts as Caitlyn Smith opened the Town Square stage at 10.30am. For many, including myself, she has been one of the highlights of the whole weekend with that stunning voice and thoughtful songwriting. Callie Twisselman also really impressed me on the two occassions I saw her perform today, just happy to be up on stage, she engaged with the crowd well. Due to some back line issues Walker County had to adapt their set and their usual set-up but still managed to pull off a brilliant performance. The Indigo reached capacity crowd for Tenille Arts which was no surprise but luckily we managed to sneak in to catch her gripping performance.

On the spotlight stage today, Avery Anna’s vocals impressed me and her unusual yet beautiful rendition of ‘Ring of Fire’ and ‘Forever and Ever Amen’. Seaforth made that stage into a party stage with their single ‘Good Beers’ whilst Tenille Arts once again had the crowd in the palm of her hand for her set.

To the main arena and problems somewhere along the line getting artists from Ireland to London meant that none of the artists gear had shown up so things were running a tad late and they were all having to share the same instruments that C2C had acquired from somewhere. It was worth the wait though as Hailey Whitters, a songwriter I greatly admire, took to the stage to share some new songs from her album which comes out next week as well as some fan favourites and a cover or two. ‘Everything She Ain’t’ was a real highlight for me whilst ‘Heartland’ was a crowd pleaser. She also performed Trisha Yearwood’s debut single ‘She’s In Love With the Boy’. Her rendition was energetic and charming.

Flatland Cavalry was the band I knew the least about coming into the weekend but the level of musicianship they displayed blew me away, perhaps the next Zac Brown Band? It’s a proper Texas country band, their brand of authentic country music slightly different to anyone else on the line up. They opened with ‘Some Things Never Change’ and my foot instantly began tapping. Lead singer Cleto Cordero invited his wife Kaitlin Butts on stage to sing ‘A Life Where We Work Out’. They had already won me over by this point but I thought this was a particular highlight. The tempo stayed high after that as they got the crowd singing along to John Denver’s ‘Take Me Home, Country Roads’. They followed this with Wesley Hall showing off his fiddle skills in their rendition of ‘Dueling Banjos’ before concluding with ‘Stompin Grounds’.

Ashley McBryde followed, it’s been nice watching her progression over the years from performing acoustically on the pop-up stages to performing on the main stage the very next year and now, next to the headliner. It’s been a deserved journey though and a joy to watch. She opened with the feisty ‘Martha Divine’, introducing us to the slightly rockier show that she was about to put on. She kept the tempo high as she danced her way through ‘El Dorado’, ‘Never Will’ and ‘Living Next To Leroy’. The moment of the night was when she talked about ‘young folks (folks not old enough to drink)’ and how bringing them to concerts like that showed them they could stand where she is standing. This led nicely into ‘Girl Going Nowhere’. McBryde looked overwhelmed by the crowds reception of the song as she said “London, you’re going to make me cry!” ‘Dive Bar in Dahlonega’ was another special moment between the fans and McBryde and when she concluded on ‘One Night Standards’ the fans were begging for more.

Unfortunately, time was tight though and before you knew it, it was Luke’s turn. If it was loud before, it just got louder. He made a dramatic entrance, walking out to the band playing the intro of ‘When It Rains It Pours’ but as he started singing there was no sound for us out front. Down at the front, they managed to get his attention that they couldn’t hear and he told his team who swapped out his mic all whilst the band kept on playing. He stopped proceedings to ask if we could all hear now. Ever the professional, he took it from the top again. He worked the stage as he sang ‘1, 2, Many’ and told us the story behind ‘Houston, We Got A Problem’. The whole crowd were up on their feet, belting out ‘One Number Away’ before Combs asked permission to perform a cover. Here came the big surprise as he began ‘Dive’ by Ed Sheeran before welcoming the man himself to join him on stage which judging by the gasps and screams from the audience meant they were quite surprised to see him! The pair performed it together perfectly.

‘Dive’ wasn’t the only cover he did as he sang ‘Brand New Man’ a song made famous by Brooks and Dunn, a song he sang with the duo on their ‘Rebooted’ record. The powerful one for me was ‘Beautiful, Crazy’ which saw a tear prickle my eye. Though he’d taken it down a notch for that last song he cranked things back up with ‘She Got the Best of Me’ and ‘Hurricane’ – his concluding song. But there was time for an encore and the level of noise suggested the crowd weren’t going to go anywhere until he’d come back out. He performed two more number one’s upon his return – ‘Forever After All’ – a tug of the heartstrings, romantic tune, followed by ‘Beer Never Broke My Heart’. I don’t know how much beer he must have gone through after throwing his cup so often in excitement! It is one of the best headline sets I have ever seen at C2C since it has begun.