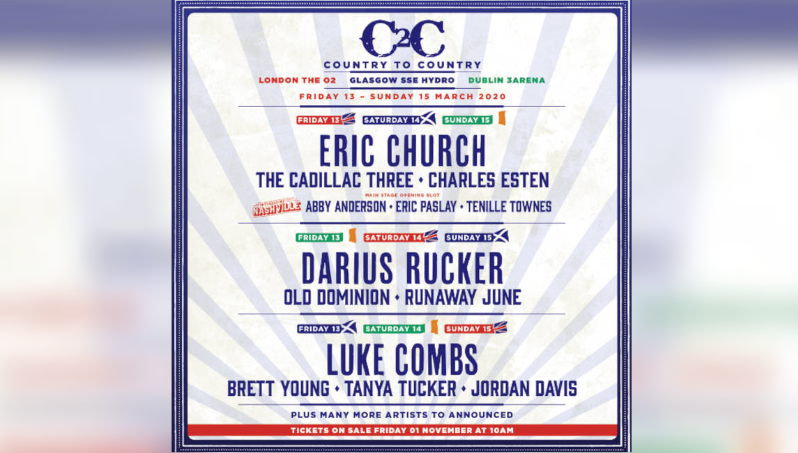 The first wave of announcements for C2C 2020 have been revealed and Luke Combs, Eric Church and Darius Rucker will be headlining the event.

Church returns to headline the festival for the first time in four years, while for Combs, the news emphasises further his meteoric rise in the country music world as it was only at C2C 2018 that he was the opener on the Main Stage. Rucker will also be topping the bill for the first time, having sub-headlined in 2013 and 2017.

Elsewhere on the line-up, Brett Young and Old Dominion return to the Main Stage – though Young will get his first chance at performing on the London Main Stage – while Charles Esten and Runaway June have been bumped up to the top tier, the latter of which shining on the Spotlight Stage earlier this year.

There are also C2C debuts for Jordan Davis, The Cadillac Three and Tanya Tucker, while Abby Anderson, Eric Paslay and Tenille Townes will be part of a Main Stage opening slot as part of Introducing Nashville.

For London, the Friday headliner will be Church, while Rucker closes the Saturday and Combs rounds off the festival. For Scotland, it’ll be Combs, Church and Rucker, while in Ireland, it’ll be Rucker, Combs and Church.