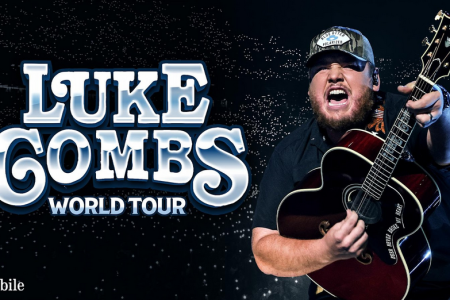 In yet another unprecedented feat, country superstar and reigning CMA Entertainer of the Year Luke Combs immediately sold out 37 of the 39 shows on his massive World Tour, including all sixteen of the North American stadium dates as well as all UK arena dates.The tour broke multiple records across the world including the fastest sell-outs ever at Arlington’s AT&T Stadium and St. Louis’ Busch Stadium as well as the fastest sell-out by a first time Gillette Stadium performer in any genre. It also ranks as one of the fastest selling arena tours ever by a country artist in the UK, while Combs is the first international artist to sell-out an Australian and New Zealand tour, which he did within just hours. The Stockholm show has also been moved to a larger venue (Avicii Arena) to accommodate ticket demand. Luke Combs plays the following SOLD OUT UK & Ireland Dates

Thurs 19th    London, England, The O2 Arena (SOLD OUT)Fri 20th     London, England, The O2 Arena (SOLD OUT)The tour is just the latest milestone for Combs, who recently achieved his record-breaking 14th-consecutive #1 with “The Kind of Love We Make,” which also reached #8 on the all-genre Billboard Hot 100 chart. Combs is also nominated for three awards at the 2022 CMA Awards: Entertainer of the Year, Male Vocalist of the Year and Album of the Year for his acclaimed new record, Growin’ Up. Out now via River House Artists/Columbia Nashville (stream/purchase here), Growin’ Up debuted at #1 on Billboard’s Top Country Albums chart and follows 2019’s 3x Platinum What You See is What You Get and his 4x Platinum debut, This One’s For You. A member of the Grand Ole Opry and a 6x CMA, 3x ACM, 3x Billboard Music Award-winner, Combs is in the midst of a record-setting and historic series of years. His previous release, What You See Ain’t Always What You Get, debuted at #1 on the all-genre Billboard 200 chart as well as Billboard’s Top Country Albums chart. With the record Combs reached #1 on Rolling Stone’s Top 200 Albums chart, Top 100 Songs chart and Artists 500 chart—the first country artist ever to lead all three charts in the same week and first to top the Artists 500. He also made history as the first artist ever to have their first two studio albums spend 25 weeks or more at #1 on Billboard’s Top Country Albums chart—breaking Taylor Swift’s previously held record at 24 weeks.