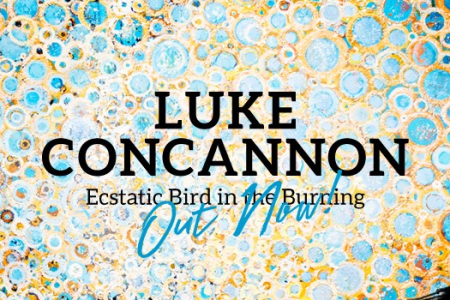 It was the summer of 2005, I was about to turn ten years old when JCB came out. My brother and I thought it was the coolest song we’d ever heard, we played it all holiday and like the cool kids we were, we were slightly ahead of the curve as that December it topped the charts! Less than five years later though, the duo went their separate ways; the pair would sporadically reunite especially for charity performances but it was time for Luke Concannon and John Parker to forge their own paths; “we didn’t quite have the capacity to sustain it over the long term, so breaking up was painful, and disorientating but my inner voice was telling me to carry on alone.” At the time Concannon wasn’t to know the twists and turns on the road ahead as he looked to reconnect with the world and with music. “I remember singing The Beatles song ‘Let it be’ in the back of the car as maybe a 7 year old, really loudly, and loving being inside that sound but it’s been a slow, growing relationship with music. I didn’t really commit to it as a path until I was 21, when I realised my best friend and I had a special musical chemistry.” It was time for Concannon to find out what music meant to him outside of the duo – who was Luke Concannon without John Parker?

Concannon had always had a desire to travel the world “As a young man I felt really drawn to the horizon, to adventure, I felt so pulled to take my back pack and explore the world” and though he toured as part of Nizlopi, there wasn’t really the time for exploration during a run of shows or recording an album. “At 30 I finally went for it and hitch hiked from England to Palestine; it was an extraordinarily enlivening trip. I wanted to be of service and in relationship so I volunteered with the ‘International solidarity Movement’ in the West bank who escort Palestinian Farmers at risk of violence and harassment to their ancestral crops.” That trip shaped who Concannon was as a person and had a big impact on his music. “It’s a powerful place; I can see why religions have been born there, those deserts, open skies and olive trees. Harvesting food as part of a community with local people – I was doing something that felt right and was in line with my values, I felt so happy. A trip like that really helped me – the media can have an indoctrinating effect but meeting and connecting with local folk in the Middle East I lost a lot of my fear and had more of the sense that we are all in this together. I want to write music from that place.”
Luke Concannon returned a changed man. Though he’d gone off on this big adventure it didn’t stop him from finding more ways he could connect with the real world and get back to creating music that really meant something to him. He took part in writing retreats and set himself strict routines to allow his creativity to flourish. His latest album ‘Ecstatic Bird in the Burning’ has been performing well in the charts recently and it was a project born out of one such experience. “I booked a retreat on Anais Mitchell’s Family farm, which is up the road from where I live now in Vermont. I would get up at 5am, fast until sun set, and just write and write for a month. By the end of the month I was hitting my stride. I then finished the songs over many early mornings for a year – getting in a couple hours music before the day got going.”
Concannon found a deeper meaning in his music, a more authentic sound, so when it came time to record the songs he wanted to capture that authenticity in the production too. “The record was produced by Jim Prendergast who cut his Teeth as a session guitarist in Nashville. He really knew how to get the best out of the core aspects of vocals, acoustic guitar and double bass. I’ve gotten the best recording results when a really synced up band just play as live as possible in a room, then you can really get juices flowing between you and get the spirit high. A lot of old records were recorded like that. It puts the emphasis on listening, presence and musicality.”

Concannon draws on so many influences within his music, personal experience is at the heart of all he does. Ever the explorer he looks for inspiration from a range of sources – books by writing coaches like Brenda Ueland and the wide eclectic range of artists he idolises. “I’m loving the new album by Haim, Richard Thompson is a big hero of mine, Rory Mcleod – a huge influence. I love Anais Mitchells songs, particularly Hades town, The hip hop musical Hamilton and Declan O’Rourkes Chronicles of the great Irish Famine.” But he still draws upon the music that he grew up listening to as a child to help in the quest to find his own voice. Artists such as Van Morrison, Tom Waits, U2, Bruce Springsteen and Steve Earle were a few early inspirations for Concannon. His parents played him a lot of traditional Irish music as well and this broad spectrum is evident in his music, it’s helped him to carve out his own unique sound. A sound that has captured the attention of famous faces such as Hugh Jackman and Ed Sheeran. The latter of which gets an honourable mention in Concannon’s latest single ‘Doing Nothing’ a song he took himself off grid to write as he discussed on grid addictions.
Concannon wrote Doing Nothing in a friends cottage near Machynlleth in Wales; it had no electricity, running water or reception. “It’s a grieving song – I feel so sad that I have spent so much time looking at you tube, or internet surfing, because it’s not respectful to my self or others; I’d love to be able to use my time intentionally rather than getting lost in my phone; it’s a big learning curve for all of us right now.” The song connects well and startles the listener into looking at their own screen time, encouraging one to evaluate their priorities in life.

Concannon’s journey within music is an exciting one, a varied one and he still looks back on those early days as part of Nizlopi fondly. “We had an Extrovert/Introvert Dynamic going on. John is very practical, very hard working, quiet and no nonsense, I’m in my imagination a lot, in ideas and ideals, and very expressive and impulsive. That Ying/Yang combination is highly creative. We would have these really difficult heart breaking fall outs, then get on stage and play these transformative gigs. The spirit was very strong in that band and a great way to spend my 20s.”
Now, with all his knowledge and experience of the world and of songwriting, he looks to pass this on to the next generation; “My wife Stephanie Hollenberg (who sings on ‘Ecstatic Bird In the Burning’) my brother Darius Christian and I are putting together a virtual songwriting workshop for the Summer (you’re all welcome!) I’m coaching songwriters via zoom.” He also looks ahead to the next project he might work on himself, “Steph and I are building a cabin this Summer as our home here. And I want to write a long form piece like Hades Town, Hamilton or West Side Story Theres something so powerful about those pieces where a story and characters sing a world in to existence.” Luke Concannon knows there is no end to what he can achieve, what he can discover – there are no limitations in front of him just a world of opportunities and he continues to live a life of endless adventure.