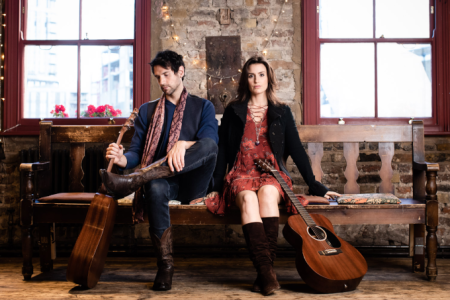 Upcoming brother and sister duo The Luck – made up of Max and Esmay – released their debut album ‘Ready to Run’ in July and spoke to Maverick about the remarkable way it came to fruition
You will be hard pressed to find a story as unique as The Luck’s. It’s simply insane and for a band starting out on their debut album, it’s possibly one of the best stories others in that situation can read.
After performing at the iconic venue The Troubadour, Max and Esmay Luck were approached by a man named Paul Broucek, who told them that he’d always wanted to work with a London duo when it came to the music side of things, even though he was more experienced when it came to working on films. As such, Broucek – who is Head of Music at Warner Brothers Pictures and has worked on films such as Lord of the Rings amongst other things – produced their album.
This meant that the duo got to record out in LA at some amazing studios with some top level professionals and made t he very most of the opportunity to work in areas of space that music they grew up admiring was made.
“I was recording piano on Prince’s’ piano in Castle Records studio A!” Max exclaims. “It was just such a magical experience – I can’t explain it really, but coming from London and then going to all these incredible studios working with these amazing engineers…it was such a learning experience for Esmay and I to both go and work with such high quality people.
“Holding On and bits of other tracks as well were recorded in Studio D at The Village Recorders and one of our biggest influences is Fleetwood Mac – they basically built that room for Fleetwood Mac to record ‘Tusk’ in, so just being in that space making our music was great,” Esmay adds. “It’s the best feeling in the world – just so humbling and wild.”
Songs from a deep place
A lot of the songs from The Luck are very deep, meaningful and open, which is far from out of the ordinary when it comes to country music, but considering that the two are siblings, it would be understandable if this was harder. You wouldn’t want your friends being hurt, let alone a sibling.
This – in theory – could prove problematic as Esmay sings about heartbreak on the album, however, the dynamic between them has allowed them to be closer than ever in some regards.
“There’s a lot of raw emotion that goes into song writing and you can’t fake it,” Max says. “When you write a song, it’s got to come from a real place. I know that for Esmay, it’s a cathartic process. I try not to do the whole break-up thing too often, but Esmay has definitely been through her fair share of ups and downs in that perspective over the years and it’s been amazing to be able to help through the experiences she’s gone through.
“It’s nice that I can put a lyrical or a chord based hug around her shoulders and say, ‘alright, let’s frame this’ and I’ll try and help her bring a lot of the arrangements to life.”
“I wonder if that’s why a lot of our music is positive and I wonder if it is because often we are having conversations with each other and you always try to pick the other person up, so, rather than our songs kind of dwelling on a negative emotion, we are always trying to turn it round,” Esmay adds. “In conversation, that’s what we are trying to do with each other anyway, so it kind of just leads directly into the themes of the songs I guess – and the way that they develop.”
Looking forwards
The duo are very much gearing up for their album release date and some special things that’ll come along the way – such as a warm-up show – but they do also have plans to get out on the road not long after.
“We’re hoping to be able to go on tour in the Autumn,” Max says. “We’ve already started looking at some dates and we’re really excited for the launch show – that’s our major push. We are going to try and have such a massive party.” [Update – launch show took place on July 25 with Roisin O’Hagan as support]
“We’re making a free give-away for everyone that comes,” Esmay adds. “It’s a real moment for us so we want to mark it as something special and we hope that a lot of our fans will come down and celebrate with us.”
The future certainly looks very good for the duo and who knows, maybe their cinematic path to success will continue in true Hollywood style.

Album Review: ‘Ready to Run’ – The Luck
Zoe Deighton-Smythe
The Luck make a sweet, moving sound in their latest album. Caressing harmonies combined with catchy chords, ‘Ready to Run’ has a good beat with nice variety. Ranging from cheerful chants to melancholy themes, each song has its own flow and vitality.
With a similar sound to Fleetwood Mac, the sibling duo’s voices complement each other very well, showing true depth of talent. Starting out with the albums titular song, you can already tell that the pair are conveying the significance of freedom and hope – its folksy and pleasing but the rest of the songs really show off their incredible song-writing ability.
Place in the Sun is a particular highlight, with entrancing lyrics and beautiful chords, which then leads nicely into the upbeat and captivating Vertigo.
Dealing with happiness after heartbreak and trying to find the silver lining in life, ‘Ready to Run’ is both peaceful and feisty – it has a sincere, relatable message for listeners and remains simplistic but profound at its core. Uplifting and freeing, ‘Ready to Run’ is a good listen.
www.theluckmusic.com