Marie Marx: "The team and I are aiming high and the only way is up!" 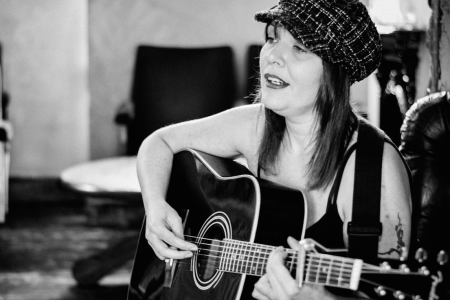 As rollercoasters go the start of 2018 has been pretty much that for northern singer-songwriter, Marie Marx, allowing herself a number of firsts along the way.
Her eclectic mix of bluegrass, folk, jazz and country styles are ensuring Marie caters for a number of different tastes and it is those which have seen her land her first O2 Academy gig, supporting Brooklyn’s Mishka Shubaly when he heads to Newcastle as part of his UK tour on June 14. “This is a big step for me but not a step that I’m scared of,” Marie told Maverick.  “I’m extremely excited to be playing support for Mishka; it will be a great experience I’m sure! Plus, the support I’ve received already regarding it is totally overwhelming.”
Just finishing off touring her debut album, THIS IS THE THING, a ten track stairway to blissful heaven which has seen her tour quirky micro pubs and brewery haunts across her native North-East & Yorkshire, Marie moved fast to make the rest of the year just as enjoyable.
Enlisting the services of a new manager, the Shubaly gig, an appearance on Metro Radio’s iconic Night Owls with Alan Robson MBE, as well as a few other things in the pipeline, it’s shaping up to be an interesting year in mainstream music.
“I’m extremely busy but that’s just the way I love, excited is an understatement,” continued Marie whose husband Rob has backed her completely in her music ventures, so much so that she was able to leave employment to pursue her dreams. It’s a new adventure and we welcome the unknown.
Marie added, “We’re both enjoying the ride and it’s been great meeting new people and exploring different avenues. The interview (print and radio alike) side of things is all new to me but I’m loving chatting about what I’m passionate about.”
Her recent outing on Night Owls was testament to her progression and abilities, showing how far she has come in such a short space of time, Alan Robson even stating that she “can go far, national tours, it’s possible you know – keep writing and never stop.”
Advice of such a high calibre from a DJ of such high-standing strengthened the belief within, Marie and her team readying to push the boundaries over the coming months, and years.
“We have a few tricks up our sleeve for the rest of the year,” stated Marie. “We’ve some really great plans and things are happening every day. The team and I are aiming high and the only way is up!”