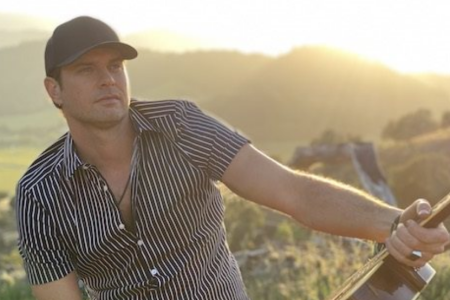 I didn’t start playing music till I was in college but I knew once I started, and once I started writing songs, I always knew it’d be something that I would do. I didn’t really know that I would have these opportunities from playing music, and I was probably too bashful to say that dream out loud. But I think, just in my heart, I knew that this is what I wanted to be doing and that I was gonna give it a good shot.

What did your family make you listen to growing up and what are you choosing to listen to now?

Country music is just kind of the default setting you know if the radio was on it would be country. I really was into alternative music a lot of it coming from your side of pond growing up in the 90s – Oasis was like my favourite band. The What’s the story Morning Glory record. I know, there’s like, not supposed to be your favourite. Alanis Morissette, Hootie, and the Blowfish, a lot of that stuff that was happening then. I grew up playing basketball. So there’s a lot of rap and hip hop in the mix too.

What’s your songwriting process like, do you always start from the same place or is it different every time?

I like to go with the flow a little bit, I don’t try to just explicitly get it from some place because it feels like there’s something less inspiring about it. If it kind of bubbles up a little bit naturally, I feel like there’s more fruit. So I try to go with whatever the vibe is that day in the room, whether it’s the lyric or the music, if it’s an idea that I had, if it’s an idea somebody else had, I just try to ride that wave as best I can.

When you wrote ‘Prayed For You’ did you know you had something special?

I’ll be honest with you, I had no idea, I knew we’d written a good song. I could tell the day that we came out of the room, that we had something cool. Everybody in the room that day was really pumped, it actually took us two sessions to finish it, but when we left it, everybody was pretty excited about it. But to that point, I’ve never had any success like that, you know, I’d never written a hit, so I didn’t know. When it kind of started to do its thing, I think, it was probably Ash that I wrote with and also my manager, I think he probably saw it before I did.

You moved to Nashville to be a songwriter primarily, if you could get a song cut by anybody who would it be?

Different songs can fit artists in a different way. Because everybody has their own lane. So I’ve got songs that I would love to hear Jon Pardi sing, I got songs that I would love to hear Luke Bryan sing, I have songs that I’d love to hear Morgan Wallen sing, so it’s about finding a home for the right song. Paul and I, along with Eric Paslay just had a cut by Cody Johnson that was just a perfect thing, it could not have had a better home. Cody’s an unbelievably talented guy and the song just fitted in perfectly. And that’s just like the dream scenario, you know?

What’s your favourite aspect of the industry, writing, recording or performing?

They’re so hand and glove to me. I really do love recording new music, but you can’t do that without writing music. And if you don’t have people that want to hear it, there’s really no point in recording. So they kind of go hand in glove. I came at this as, attacking it from a songwriters perspective, so maybe if I had to just kind of keep one maybe that’s what I would do. But there’s nothing like getting on stage and playing songs and a crowd singing the song you’re singing back to you. That’s the best feeling in the world.

If they were to make a movie about your life, who would you cast to play yourself and what would be the opening theme tune?

Well, I would cast Rick Fox to play me former Laker great. For some reason it was always a running joke with my band that that’s who would play me, it had to be a basketball player and the opening montage would be Europe’s ‘Final Countdown’. In my head anytime something cool is about to happen, that’s the song that’s playing.

You just played C2C and you’re returning to play Country Music Week later this year. What’s your favourite thing about the UK?

I’ll have to say two things. One, the people there are awesome. The food’s been great too, we went to a great Indian restaurant, but I would say my two favourites are the people and the public transportation. It’s so easy to just hop on the train I don’t have to find a place to park my truck in town and pay a million dollars to park, so riding the train, I can get used to that.

Honestly, I’ve been very blessed to celebrate a number one record, platinum, gold records. Playing the Opry, that was unbelievable! I think the biggest moment to me and to the crew is when ‘Prayed For You’ was just about to go to number one, that was when we first got a tour bus. Back home, that’s the real dividing line, at least it always was for me and for everybody that I knew and so we loaded up a tour bus in 2018 and got to go on tour with the Eli Young Band and Chris Young and play these arenas. Our bus was parked by their 30 buses, we just felt like we belonged. Even though it’s like almost the same thing as the trailer that I grew up in, when I was really young, maybe slightly bigger, it has been the biggest game changer.

We’ve got new music coming out. I expect to have some mixes any day now. So we’ll have new music out. I’m sure there’ll be discussions with the record label about me wanting to release them immediately and them wanting to be strategic about it. They’ll probably win, because it’s their job, but I can’t wait to get it out!

Matt Stell will be coming on tour with Elvie Shane 19th – 23rd October.