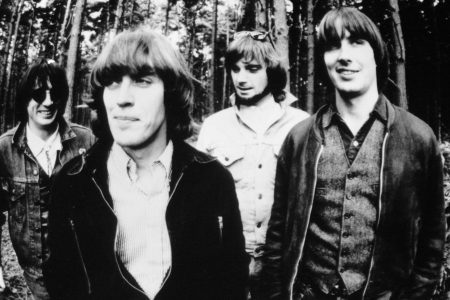 So there it was, LA in the early 80s, a time of synth-pop and stadium rock. And Sid Griffin had a thought about a new group. “I had this idea of what would happen if the top of the band, the guitars and the vocals were very West Coast 60, punchy and beautiful, but the bass and drums were as aggressive as a punk band,” he says.
“The Byrds records don’t really rock out, they kinda float, which is great, but I thought what if you had the Sex Pistols’ Steve Cook and Glen Matlock playing behind Buffalo Springfield’s front line.”
It was a stroke of genius that gave birth to the Long Ryders, an irrepressible live act who also made excellent records. They were a band, part of what was dubbed the Paisley Underground, that also threw in a healthy dose of 60s psychedelia and more than a touch of the Beatles, not least a flavour of George Harrison and REVOLVER.
The Long Ryders were, it’s been said, the right band at the wrong time, and despite their transatlantic following gave up the ghost due to the musical malaise of the times.
That was 30 years ago but now their legacy is recognised in a sterling 4CD, 76-track box, FINAL WILD SONGS on inspired UK indie label Cherry Red. The collection – all three studio albums, a previously unreleased live set and a bundle of other tracks – has brought the band back to life, for a short time at least.
There’s a two-week tour of the UK and Europe in May and that’s it for now. Drummer Greg Sowders has, notes Griffin “a deadly serious day job” in publishing at Warner/Chappell. And the band can only play during his holidays. Not to mention everyone’s home life. Griffin has lived in London for many years (his bluegrass-tinged combo, the Coal Porters, are a must-see on the live scene) and he adds: “One guy lives in Richmond, Virginia, not far from Washington DC, another lives near Chicago and the fourth lives in Los Angeles. This is not an easy band to get together!” The other two members being singer/guitarist Stephen McCarthy and singer/bassist Tom Stevens.
FINAL WILD SONGS is a two-year labour of love by Griffin and Stevens, with notes to each track by he and McCarthy.
The set chronicles in full the Long Ryders’ blistering recording career, a melee of twanging, thundering country-rock with its pop (and punk) sensibility, cracking self-penned numbers mixing with country, rock and blues classics. And amazes even long-standing fans with its breadth of vision. The debut EP 10/5/60 was produced by Earle Mankey, guitarist and founder member of art-rockers Sparks (and whose two albums as an LA garage band had an equally cross-genre edge, produced by James Lowe, singer with the Electric Prunes, and Todd Rundgren). The first album, NATIVE SONS, had Henry Lewy (who’d worked on a string of Joni Mitchell albums and Neil Young’s Harvest) at the controls, and featured ex-Byrd Gene Clark on harmonies, but it was the follow-up STATE OF OUR UNION that truly cemented the transatlantic synergy. It was the sound of the new west, yet was produced in Oxfordshire by ex-Kursaal Flyers’ drummer Will Birch. Guests included the Kursaals pedal steel guru Vic Collins. This was the record that opened with the band’s signature tune, the rampaging Looking For Lewis And Clark. The third album, TWO-FISTED TALES, had Ramones producer Ed Stasium at the helm.
Griffin, whose vocals and guitar are at the forefront throughout, says: “We helped codify the idea that there is something called Americana, called alt-country.
“I want people to realise that the band were important, a key link in the chain. I’m not saying we’re worth our weight in plutonium and everybody’s got to bow down to us but I do want it know that we were doing this before I’d ever heard the words ‘Dwight Yoakam’. And Lucinda Williams, as much as I love her, was our opening act for about 30 shows. Should you like Lucinda, or the Avett Brothers or Trampled By Turtles, we’re worth checking out.”
But if the records were impressive, the concerts were a step above. “Nothing was as good as the live shows, they were just nuts,” says Griffin. The band still rock with the same intensity whenever they regroup, which is rarely. “We didn’t play for 17 years then did a brief tour of Europe 10 years,” says Griffin (the tour brought the live album STATE OF OUR REUNION). “There were two shows in Atlanta in 2009, just some crazy guy with money, then we did a benefit in LA, our first show there for 27 years. In 2014 we did four shows in Spain and I haven’t seen ‘em since.”
Any new songs in the pipeline? “No time! We’re going to get together on a Sunday afternoon, chat and get rid of the ‘How’s your mother’ stuff, Monday we rehearse and Tuesday the tour starts.”
And if you need any more background, Griffin says: “I tried to explain it to my daughter and I said basically your dad was in a Kings Of Leon band 20 years before the Kings Of Leon…”
FINAL WILD SONGS is out now on Cherry Red Records. The Long Ryders’ whistlestop UK and Ireland tour starts in Bristol on May 3 and ends in Dublin on May 8.