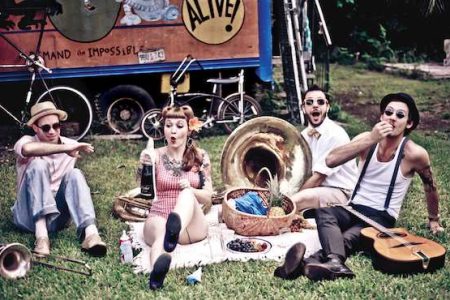 Meschiya Lake & The Little Big Horns hit Stockton in early September as part of their UK tour. Having recently reviewed their CD, LUCKY DEVIL, I knew roughly what to expect from them from an audio point of view, but the visual aspect delivered some welcome surprises. Musically, a mix of jazz, blues and torch songs rubbed shoulders with the spirits of Duke Ellington, Bessie Smith, Jelly Roll Morton, Frank Sinatra, Dean Martin et al, presented via a medium of genre-busting musicianship and fronted by Meschiya Lake, who could have stepped out of the past, the future or just about any point in between.

The vocals were strong and sung with feeling every step of the way. As the first number began One Sweet Letter From You another ace up the sleeve emerged, in the form of dancing couple, Chance Bushman and Amy Johnson. Forget anything you see on TV; this is real dancing. For virtually the entire course of the evening, Chance and Amy tore it up with an amazing display of jazz dancing, tap, Lindy Hop, Charleston and several other genres thrown in for good measure. The musical arrangements, with their lengthy mid-song musical breaks, created perfect opportunities for the dancers to grab the full attention of the audience. At such moments, Meschiya remained at the centre of the stage with a contented smile on her face and her hands behind her back, like a circus ringmaster observing and thoroughly enjoying the performances of her talented troupe. Indeed, Meschiya has a not-so-secret circus past, although there was no time for eating glass or fire dancing on this occasion. Flames did make a guest appearance at one point though, when the band segued into Happy Birthday and a cake was brought to the stage and presented to Meschiya (albeit approximately four hours early). The show was in two parts. The first ran for about 40 minutes and featured songs such as Why Don’t You Do Right, Egyptian Ella, Lucky Devil and a barnstorming Reefer Man.

The half-time break seeing Meschiya in CD-signing action in the lobby-a stint which proved popular with her new fans. The second half lasted just over 50 minutes and started with an instrumental number to allow Meschiya to get back onto the stage after her signing session. Apart from a unique rendition of the aforementioned Happy Birthday we were treated to an exciting set including Curse Of An Aching Heart, Satan Your Kingdom Music Come Down and the stirring finale I Believe In Music which summed things up in a very apt fashion. There was just time for a wonderful encore with I Wonder Who’s Kissing Her Now. A thoroughly entertaining evening, Meschiya Lake & The Little Big Horns are a unique act and it’s little wonder they are attracting many new fans on their travels. Hopefully they’ll be in the region before too long, especially as they have a new CD in the pipeline-how about a DVD one day, Meschiya?