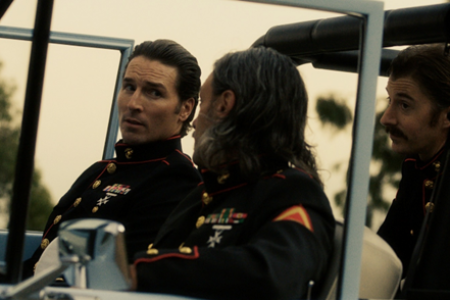 Midland’s rewritten what post-Urban Cowboy country can be since arriving with 2017’s Platinum-certified, double Grammy® nominated “Drinkin’ Problem.” The progressive trio of Mark Wystrach, Cameron Duddy and Jess Carson have sought to merge cultural influences, far-flung pieces of 20th century Country music and a cool that defies most Nashville touchpoints.

“We’ve always loved pop culture,” says bassist/harmony singer Cameron Duddy, “and the way it threads through how people live. Done properly, it becomes what people reference in their lives… and when we were trying to think of how to represent this song, we wanted something more than just the obvious reference to a guy and a girl getting together.”

“And,” adds guitarist/vocalist Jess Carson, “we wanted to show people our own dynamic, too. How do you show our friendship in a way that’s not just a bunch of guys on the road?”

“Sunrise Tells The Story” riffs on the Officer & A Gentleman notion of the class structures, formalities, and realities of military life. But rather than the heroine being a local girl, the young woman is the chief officer’s daughter – and the location is his retirement party. Equal parts buddy movie, burgeoning romance and a bit of the morning after, “Sunrise” is a classic spin on themes, euphoria and the way a great country song lifts everything around it.